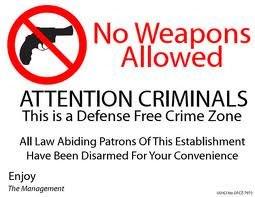 Editor's Note: The heart-rending nightmare that occurred at Sandy Hook Elementary on Friday was not only a product of the pure evil of one individual, but also yet another complete failure of the State. The precious children lost were victims, not only of an individual monster, but of a collective monster. The State made it incredibly difficult for their parents to avoid sending them to mass camps (modern schools) every day, all day. And once there, the State completely failed to keep them safe. More than that, by making the Sandy Hook mass camp a "Gun-Free Zone", the State actually made it impossible for anybody (staff, teachers, parents) to protect them.

As Murray Rothbard argued, state operations should not exist. But as long as they do exist, they should be operated as effectively as possible according to the needs and desires of the taxpayers forced to fund them. As long as state schools exist, as the following article by Ninos Malek argues, staff and parents on campus should be allowed to be armed to protect their charges and children. A sign that says, "Gun-Free Zone" serves not as a warning to murderers, but as a welcome mat.

Tragedies and atrocities inspire an intense desire in the human heart for radical action and change. The radical change that follows Sandy Hook should not be to disarm the general public even further, which would only lead to even more atrocities (at the hands of both independent criminals and the State), but a mass rejection of state schooling. In the wake of this tragedy, parents should pull their children out of public schools for the sake of both their education and safety. And they should cry out, with the protective passion that comes with being a father or mother, for the immediate and complete abolition of all restrictions on home-based and private education. It is time for parents to take their children back from the State. - Daniel J. Sanchez

In light of recent events, President Bush organized a summit on school safety. Of course, the reason these events make the news is because they are in actuality not that common once you consider how many shootings have taken place relative to the number of schools there are in this country.

For example, in 2006 there have been only four incidents with guns at school. Basically, schools are safe places for children; they are more likely to die violent deaths at other locations. So, while I agree that we don't want to have a knee-jerk reaction to certain events, the real issue that must be addressed is why schools are not allowed to protect themselves from psychotic or evil people.

According to John R. Lott, Jr., Ph.D. economist and author of More Guns, Less Crime and The Bias Against Guns, banning guns might seem to be the logical way to keep children safe in school. However, he uses a simple analogy:

Would you feel safe putting a sign in front of your home saying, "This home is a gun-free zone"? Law-abiding citizens might be pleased by such a sign, but to criminals it would be an invitation.

Lott points out that in 1985, only eight states had right-to-carry laws — laws that allow a person to automatically get a permit, provided he passes a background check and completed a training course. Today there are forty states that have some version of these laws. Lott's examination of the data showed that "from 1977 to 1999, states that adopted right-to-carry laws experienced a 60% drop in the rates at which the attacks occur and a 78% drop in the rates at which people are killed from such attacks."

Moreover, he points out that before 1995, it was possible for teachers to bring guns to campus in many states and that "the rash of student shootings at schools began in October 1997 in Pearl, Mississippi after the ban," (my italics).

Israel and Thailand have been cited as examples of how guns in schools can save lives. In fact, Rep. Frank Lasee (Republican) of Wisconsin plans to introduce legislation to allow teachers and administrators to carry guns here in the United States. Undoubtedly, liberal Democrats and Republicans will not support such legislation, arguing that guns are too extreme a measure to take. Some more conservative politicians will probably propose legislation mandating that all local governments provide a police presence at all schools in the country.

But, if providing education is supposedly a government duty and teachers at public schools are agents of the government, why can't they be trained to carry a gun to protect the children the state has placed under them?

The question here is whether or not properly trained teachers and administrators should have the freedom to bring a weapon to campus — to act as extensions of law enforcement on school campuses.

The law currently prevents this from happening. The Gun-Free School Zones Act of 1990 made it unlawful for any individual to knowingly possess a firearm in a school zone, even a police officer when not on official duty or a teacher who might also be a police reserve officer!

The term "school zone" means in, or on the grounds of, a public, parochial or private school; or within a distance of 1,000 feet from a school. However, the United States Supreme Court overturned this in 1995 (Unites States v. Lopez) because it violated the limits of the Commerce Clause in the Constitution. Legislation stills makes it illegal to have a gun within 1,000 feet of a school.

The United States Secret Service along with the Department of Education produced a study entitled "The Final Report and Findings of the Safe School Initiative: Implications for the Prevention of School Attacks in the United States" which provided information on the background of school violence and myths associated with school violence.

However, the main suggestion given to educators is:

Finally, educators can play a part in prevention by creating an environment where students feel comfortable telling an adult whenever they hear about someone who is considering doing harm to another person, or even whether the people are considering harming themselves. Once such an environment is created, it will remain important that the adults in that environment listen to students and handle the information they receive in a fair and responsible manner.

So there we have it: the government that is supposed to protect people ends up only recommending a gauzy "environment" in which everyone is supposed to feel special and listened to. Instead of protection, we get therapy.

People respond to incentives. Economic analysis can be applied to criminal behavior. People choose to do more of something when the cost is low and choose to do less of something when the cost goes up. Why does this logic suddenly fall apart when we are talking about degenerate, cowardly adults or students who want to commit murder? They too might think twice if they knew they could be stopped.

The situation becomes more infuriating when it comes to private schools. Why private institutions are not allowed to determine their own safety policies is a clear violation of property rights by the government. Let the voluntary decisions of individual schools and parents (consumers) decide if children should be in the presence of teachers with guns.

After all, don't parents have the right to take care of their children in the manner they see fit? I can hear the objection: "What if a teacher is psychotic and decides to shoot all his students?" I am perplexed when I hear that same argument being used against allowing airlines to arm their pilots (and, hence, protect their own private property). If a pilot has mental issues, can't he fly me into the ground and kill me if he wants to already?

In fact, I would rather he put me out of my misery with a gunshot to the head then allow me to think about my impending death as he nosedives into the Earth. My point is if a teacher is emotionally unstable, there is nothing that prevents him from bringing a gun to campus and committing his cowardly, pathetic act now.

If we had a free-market in education and the Second Amendment was respected, those parents who did not trust teachers with guns would send their children to gun-free schools and those who felt that a school with armed teachers provided a safer environment would reward schools who provided that service with their dollars. The training and evaluation of teachers could be done by private sector institutions of course.

Our public educational system is one of coercion — people are forced by the government through taxation to support schools. So, I could understand the objection of anti-gun parents to legislation which arms the teachers and administrators of their child's school. Again, this is yet another example of how a private, voluntary system would be more effective and responsive to parents' wishes.

Unfortunately, because the government has monopolized the educational system and the Second Amendment has lost its true meaning, schools will probably not be able to protect themselves more effectively against those who are mad at the world or who have unresolved "issues." We hear about the stories of children and teens being killed with guns — maybe it should be time to hear about how children and teens were saved because of guns.