It should by now be all too clear that we cannot rely upon Alan Greenspan, or any Federal Reserve Chairman, to wage the good fight against the chronic inflation that has wrecked our savings, distorted our currency, levied hidden redistribution of income and wealth, and brought us devastating booms and busts. Despite the Establishment propaganda, Greenspan, the Fed, and the private commercial bankers are not the “inflation hawks” they like to label themselves. The Fed and the banks are not part of the solution to inflation; they are instead part of the problem. In fact, they are the problem. The American economy has suffered from chronic inflation, and from destructive booms and busts, because that inflation has been invariably generated by the Fed itself. That role, in fact, is the very purpose of its existence: to cartelize the private commercial banks, and to help them inflate money and credit together, pumping in reserves to the banks, and bailing them out if they get into trouble. When the Fed was imposed upon the public by the cartel of big banks and their hired economists, they told us that the Fed was needed to provide needed stability to the economic system. After the Fed was founded, during the 1920s, the Establishment economists and bankers proclaimed that the American economy was now in a marvelous New Era, an era in which the Fed, employing its modern scientific tools, would stabilize the monetary system and eliminate any future business cycles. The result: it is undeniable that, ever since the Fed was visited upon us in 1914, our inflations have been more intense, and our depressions far deeper, than ever before.

There is only one way to eliminate chronic inflation, as well as the booms and busts brought by that system of inflationary credit: and that is to eliminate the counterfeiting that constitutes and creates that inflation. And the only way to do that is to abolish legalized counterfeiting: that is, to abolish the Federal Reserve System, and return to the gold standard, to a monetary system where a market-produced metal, such as gold, serves as the standard money, and not paper tickets printed by the Federal Reserve.

While there is no space here to go into the intricate details of how this could be done, its essential features are clear and simple. It would be easy to return to gold and to abolish the Federal Reserve, and to do so at one stroke. All we need is the will. The Federal Reserve is officially a “corporation,” and the way to abolish it is the way any corporation, certainly any inherently insolvent corporation such as the Fed, is abolished. Any corporation is eliminated by liquidating its assets and parcelling them out pro rata to the corporation's creditors.

Figure 12 presents a simplified portrayal of the assets of the Federal Reserve, as of April 6, 1994. 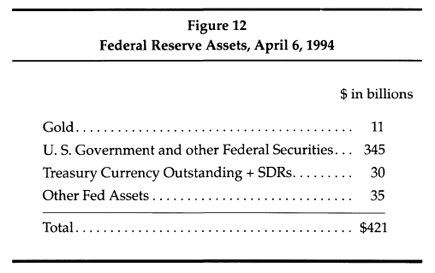 Of the Federal Reserve assets, except gold, all are easily liquidated. The $345 billion of U.S. government and other federal government agency securities owned by the Fed should be simply and immediately canceled. This act would immediately reduce the taxpayers' liability for the public debt by $345 billion. And indeed, why in the world should taxpayers be taxed by the U.S. Treasury in order to pay interest and principal on bonds held by another arm of the federal government—the Federal Reserve? The taxpayers have to be sweated and looted, merely to preserve the accounting fiction that the Fed is a corporation independent of the federal government.

“Other Fed Assets,” whether they be loans to banks, or buildings owned by the Fed, can be scrapped as well, although perhaps some of the assets can be salvaged. Treasury currency, simply old paper money issued by the Treasury, should quickly be canceled as well; and SDR's ($8 billion) were a hopeless experiment in world governmental paper that Keynesians had thought would form the basis of a new world fiat paper money. These two should be immediately canceled.

Fortunately for our proposed liquidation process, the “$11 billion” Fed's valuation of its gold stock is wildly phony, since it is based on the totally arbitrary “price” of gold at $42.22 an ounce. The Federal Reserve owns a stock of 260 million ounces of gold. How is it to be valued?

When the United States was on the gold standard before 1933, the gold stock was fixed by definition at $20 per gold ounce; the value was fixed at $35 an ounce from 1933 until the end of any vestige of a gold standard in 1971. Since 1971 we have been on a totally fiat money, but the gold stock of the Fed has been arbitrarily valued by U.S. statutes at $42.22 an ounce. This has been an absurd undervaluation on its face, considering that the gold price on the world market has been varying from $350 to $380 an ounce in recent years. At any rate, as we return to the gold standard, the new gold valuation can be whatever is necessary to allow the Fed's stock of gold to be allocated 100 percent to all its creditors. There is nothing sacred about any initial definition of the gold dollar, so long as we stick to it once we are on the gold standard.

Once this revaluation takes place, the Fed could and should be liquidated, and its gold stock parcelled out; the Federal Reserve Notes could be called in and exchanged for gold coins minted by the Treasury. In the meanwhile, the banks' demand deposits at the Fed would be exchanged for gold bullion, which would then be located in the vaults of the banks, with the banks' deposits redeemable to its depositors in gold coin. In short, at one stroke, the Federal Reserve would be abolished, and the United States and its banks would then be back on the gold standard, with “dollars” redeemable in gold coin at $1555 an ounce. Every bank would then stand, once again as before the Civil War, on its own bottom.

One great advantage of this plan is its simplicity, as well as the minimal change in banking and the money supply that it would require. Even though the Fed would be abolished and the gold coin standard restored, there would, at this point, be no outlawry of fractional-reserve banking. The banks would therefore be left intact, but, with the Federal Reserve and its junior partner, federal deposit insurance, abolished, the banks would, at last, be on their own, each bank responsible for its own actions.44 There would be no lender of last resort, no taxpayer bailout. On the contrary, at the first sign of balking at redemption of any of its deposits in gold, any bank would be forced to close its doors immediately and liquidate its assets on behalf of its depositors. A gold-coin standard, coupled with instant liquidation for any bank that fails to meet its contractual obligations, would bring about a free banking system so “hard” and sound, that any problem of inflationary credit or counterfeiting would be minimal. It is perhaps a “second-best” solution to the ideal of treating fractional-reserve bankers as embezzlers, but it would suffice at least as an excellent solution for the time being, that is, until people are ready to press on to full 100 percent banking.