How the Fed Rules and Inflates

Having examined the nature of fractional reserve and of central banking, and having seen how the questionable blessings of Central Banking were fastened upon America, it is time to see precisely how the Fed, as presently constituted, carries out its systemic inflation and its control of the American monetary system.

Pursuant to its essence as a post-Peel Act Central Bank, the Federal Reserve enjoys a monopoly of the issue of all bank notes. The U. S. Treasury, which issued paper money as Greenbacks during the Civil War, continued to issue one-dollar “Silver Certificates” redeemable in silver bullion or coin at the Treasury until August 16, 1968. The Treasury has now abandoned any note issue, leaving all the country's paper notes, or “cash,” to be emitted by the Federal Reserve. Not only that; since the U.S. abandonment of the gold standard in 1933, Federal Reserve Notes have been legal tender for all monetary debts, public or private.

Federal Reserve Notes, the legal monopoly of cash or “standard,” money, now serves as the base of two inverted pyramids determining the supply of money in the country. More precisely, the assets of the Federal Reserve Banks consist largely of two central items. One is the gold originally confiscated from the public and later amassed by the Fed. Interestingly enough, while Fed liabilities are no longer redeemable in gold, the Fed safeguards its gold by depositing it in the Treasury, which issues “gold certificates” guaranteed to be backed by no less than 100 percent in gold bullion buried in Fort Knox and other Treasury depositories. It is surely fitting that the only honest warehousing left in the monetary system is between two different agencies of the federal government: the Fed makes sure that its receipts at the Treasury are backed 100 percent in the Treasury vaults, whereas the Fed does not accord any of its creditors that high privilege.

The other major asset possessed by the Fed is the total of U.S. government securities it has purchased and amassed over the decades. On the liability side, there are also two major figures: Demand deposits held by the commercial banks, which constitute the reserves of those banks; and Federal Reserve Notes, cash emitted by the Fed. The Fed is in the rare and enviable position of having its liabilities in the form of Federal Reserve Notes constitute the legal tender of the country. In short, its liabilities—Federal Reserve Notes—are standard money. Moreover, its other form of liability—demand deposits—are redeemable by deposit-holders (i.e., banks, who constitute the depositors, or “customers,” of the Fed) in these Notes, which, of course, the Fed can print at will. Unlike the days of the gold standard, it is impossible for the Federal Reserve to go bankrupt; it holds the legal monopoly of counterfeiting (of creating money out of thin air) in the entire country.

The American banking system now comprises two sets of inverted pyramids, the commercial banks pyramiding loans and deposits on top of the base of reserves, which are mainly their demand deposits at the Federal Reserve. The Federal Reserve itself determines its own liabilities very simply: by buying or selling assets, which in turn increases or decreases bank reserves by the same amount.

At the base of the Fed pyramid, and therefore of the bank system's creation of “money” in the sense of deposits, is the Fed's power to print legal tender money. But the Fed tries its best not to print cash but rather to “print” or create demand deposits, checking deposits, out of thin air, since its demand deposits constitute the reserves on top of which the commercial banks can pyramid a multiple creation of bank deposits, or “checkbook money.”

Let us see how this process typically works. Suppose that the “money multiplier”—the multiple that commercial banks can pyramid on top of reserves, is 10:1. That multiple is the inverse of the Fed's legally imposed minimum reserve requirement on different types of banks, a minimum which now approximates 10 percent. Almost always, if banks can expand 10:1 on top of their reserves, they will do so, since that is how they make their money. The counterfeiter, after all, will strongly tend to counterfeit as much as he can legally get away with. Suppose that the Fed decides it wishes to expand the nation's total money supply by $10 billion. If the money multiplier is 10, then the Fed will choose to purchase $1 billion of assets, generally U.S. government securities, on the open market.

Figure 10 and 11 below demonstrates this process, which occurs in two steps. In the first step, the Fed directs its Open Market Agent in New York City to purchase $1 billion of U.S. government bonds. To purchase those securities, the Fed writes out a check for $1 billion on itself, the Federal Reserve Bank of New York. It then transfers that check to a government bond dealer, say Goldman, Sachs, in exchange for $1 billion of U.S. government bonds. Goldman, Sachs goes to its commercial bank—say Chase Manhattan—deposits the check on the Fed, and in exchange increases its demand deposits at the Chase by $1 billion. 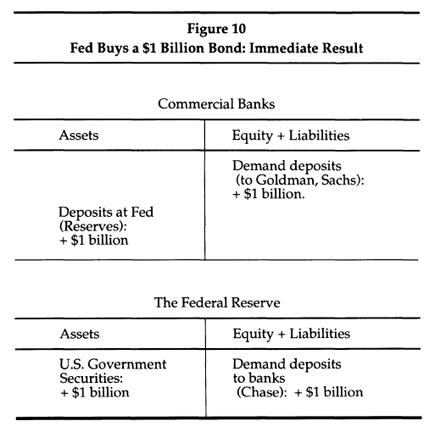 Where did the Fed get the money to pay for the bonds? It created the money out of thin air, by simply writing out a check on itself. Neat trick if you can get away with it!

Chase Manhattan, delighted to get a check on the Fed, rushes down to the Fed's New York branch and deposits it in its account, increasing its reserves by $1 billion. Figure 10 shows what has happened at the end of this Step One.

But this is only the first, immediate step. Because we live under a system of fractional-reserve banking, other consequences quickly ensue. There are now $1 billion more in reserves in the banking system, and as a result, the banking system expands its money and credit, the expansion beginning with Chase and quickly spreading out to other banks in the financial system. In a brief period of time, about a couple of weeks, the entire banking system will have expanded credit and the money supply another $9 billion, up to an increased money stock of $10 billion. Hence, the leveraged, or “multiple,” effect of changes in bank reserves, and of the Fed's purchases or sales of assets which determine those reserves. Figure 11, then, shows the consequences of the Fed purchase of $1 billion of government bonds after a few weeks. 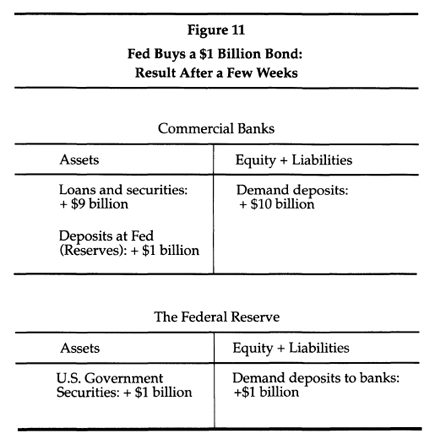 Note that the Federal Reserve balance sheet after a few weeks is unchanged in the aggregate (even though the specific banks owning the bank deposits will change as individual banks expand credit, and reserves shift to other banks who then join in the common expansion.) The change in totals has taken place among the commercial banks, who have pyramided credits and deposits on top of their initial burst of reserves, to increase the nation's total money supply by $10 billion.

It should be easy to see why the Fed pays for its assets with a check on itself rather than by printing Federal Reserve Notes. Only by using checks can it expand the money supply by ten-fold; it is the Fed's demand deposits that serve as the base of the pyramiding by the commercial banks. The power to print money, on the other hand, is the essential base in which the Fed pledges to redeem its deposits. The Fed only issues paper money (Federal Reserve Notes) if the public demands cash for its bank accounts and the commercial banks then have to go to the Fed to draw down their deposits. The Fed wants people to use checks rather than cash as far as possible, so that it can generate bank credit inflation at a pace that it can control.

If the Fed purchases any asset, therefore, it will increase the nation's money supply immediately by that amount; and, in a few weeks, by whatever multiple of that amount the banks are allowed to pyramid on top of their new reserves. If it sells any asset (again, generally U.S. government bonds), the sale will have the symmetrically reverse effect. At first, the nation's money supply will decrease by the precise amount of the sale of bonds; and in a few weeks, it will decline by a multiple, say ten times, that amount.

Thus, the major control instrument that the Fed exercises over the banks is “open market operations,” purchases or sale of assets, generally U.S. government bonds. Another powerful control instrument is the changing of legal reserve minima. If the banks have to keep no less than 10 percent of their deposits in the form of reserves, and then the Fed suddenly lowers that ratio to 5 percent, the nation's money supply, that is of bank deposits, will suddenly and very rapidly double. And vice versa if the minimum ratio were suddenly raised to 20 percent; the nation's money supply will be quickly cut in half. Ever since the Fed, after having expanded bank reserves in the 1930s, panicked at the inflationary potential and doubled the minimum reserve requirements to 20 percent in 1938, sending the economy into a tailspin of credit liquidation, the Fed has been very cautious about the degree of its changes in bank reserve requirements. The Fed, ever since that period, has changed bank reserve requirements fairly often, but in very small steps, by fractions of one percent. It should come as no surprise that the trend of the Fed's change has been downward: ever lowering bank reserve requirements, and thereby increasing the multiples of bank credit inflation. Thus, before 1980, the average minimum reserve requirement was about 14 percent, then it was lowered to 10 percent and less, and the Fed now has the power to lower it to zero if it so wishes.

Thus, the Fed has the well-nigh absolute power to determine the money supply if it so wishes.43 Over the years, the thrust of its operations has been consistently inflationary. For not only has the trend of its reserve requirements on the banks been getting ever lower, but the amount of its amassed U.S. government bonds has consistently increased over the years, thereby imparting a continuing inflationary impetus to the economic system. Thus, the Federal Reserve, beginning with zero government bonds, had acquired about $400 million worth by 1921, and $2.4 billion by 1934. By the end of 1981 the Federal Reserve had amassed no less than $140 billion of U.S. government securities; by the middle of 1992, the total had reached $280 billion. There is no clearer portrayal of the inflationary impetus that the Federal Reserve has consistently given, and continues to give, to our economy.