In a gold standard, the “reserve” of a commercial bank, the asset that allegedly stands behind its notes or deposits, is gold. When the Central Bank enters the scene, and particularly after the Peel Act of 1844, the reserves consist of gold, but predominantly they consist of the bank's demand deposit account at the Central Bank, an account which enables the bank to redeem its own checking account in the notes of the Central Bank, which enjoys a State-granted monopoly on the issue of tangible notes. As a result, in practice the banks hold Central Bank deposits as their reserve and they redeem in Central Bank notes, whereas the Central Bank is pledged to redeem those notes in gold.

This post-Peel Act structure, it is clear, not undesignedly paved the way for a smooth transition to a fiat paper standard. Since the average citizen had come to use Central Bank notes as his cash, and gold was demanded only by foreigners, it was relatively easy and not troublesome for the government to go off gold and to refuse to redeem its or its Central Bank notes in specie. The average citizen continued to use Bank notes and the commercial banks continued to redeem their deposits in those notes. The daily economic life of the country seemed to go on much as before. It should be clear that, if there had been no Central Bank, and especially no Central Bank with a Peel Act type monopoly of notes, going off gold would have created a considerable amount of trouble and a public outcry.

Figure 7 demonstrates this initial process of purchasing assets. We now have to deal with two sets of T-accounts: the commercial bank and the Central Bank The process is shown as in figure 7. 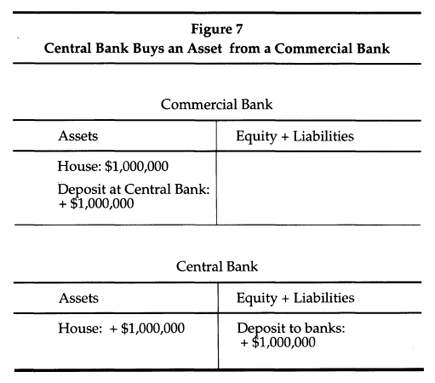 Now, let us analyze the similar, though less obvious, process that occurs when the Central Bank buys an asset from anyone, any individual or firm, in the economy. Suppose that the Central Bank buys a house worth $1,000,000 from Jack Levitt, homebuilder. The Central Bank's asset column increases by $1,000,000 for the house; again, it pays for the house by writing a $1,000,000 check on itself, a warehouse receipt for non-existent cash it creates out of thin air. It writes out the check to Mr. Levitt. Levitt, who cannot have an account at the Central Bank (only banks can do so), can do only one thing with the check: deposit it at whatever bank he uses. This increases his checking account by $1,000,000. Now, here there is a variant on the events of the previous example. Already, in the one act of depositing this check, the total money supply in the country has increased by $1,000,000, a $1,000,000 which did not exist before. So an inflationary increase in the money supply has already occurred. And redistribution has already occurred as well, since all of the new money, at least initially, resides in the possession of Mr. Levitt. But this is only the initial increase, for the bank used by Levitt, say the Rockville Bank, takes the check and deposits it at the Central Bank, thereby gaining $1,000,000 in its deposits, which serve as its reserves for its own fractional-reserve banking operations. The Rockville Bank, accompanied by other, competing banks, will then be able to pyramid an expansion of multiple amounts of warehouse receipts and credits, which will comprise the new warehouse receipts being loaned out. There will be a multiple expansion of the money supply. This process can be seen in Figures 8 and 9 below. 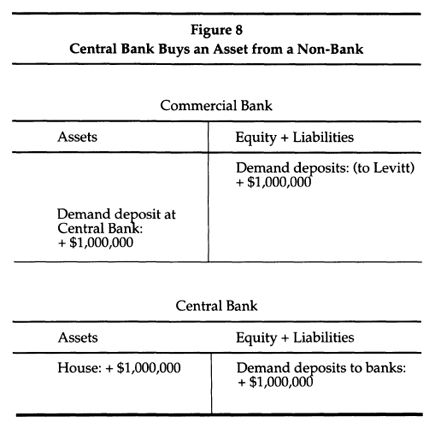 At this point, the commercial bank has an increase in its reserves—its demand deposits at the Central Bank—of $1,000,000. This bank, accompanied by its fellow commercial banks, can now expand a multiple of loans and demand deposits on top of those reserves. Let us assume—a fairly realistic assumption—that that multiple is 10-to-l. The bank feels that now it can expand its demand deposits to 10 times its reserves. It now creates new demand deposits in the process of lending them out to businesses or consumers, either directly or in the course of purchasing securities on the market. At the end of this expansion process taking a few weeks, the bank's balance sheet can be seen in Figure 9 below. Note that the situation in Figure 9 could have resulted, either from the direct purchase of an asset by the Central Bank from the commercial bank itself (Figure 7), or by purchasing an asset in the open market from someone who is a depositor at this or another commercial bank (Figure 8). The end result will be the same. 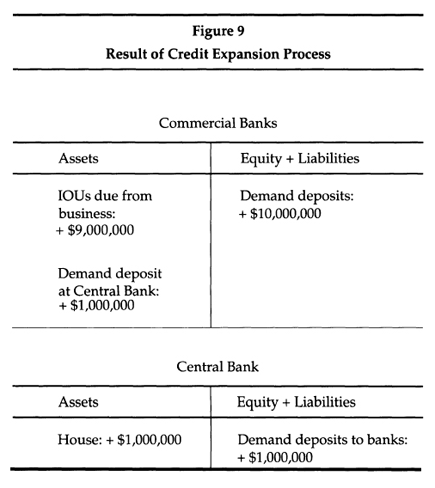