Problems for the Fractional-Reserve Banker: Insolvency

This unfortunate turn of the legal system means that the fractional-reserve banker, even if he violates his contract, cannot be treated as an embezzler and a criminal; but the banker must still face the lesser, but still unwelcome fact of insolvency. There are two major ways in which he can become insolvent.

The first and most devastating route, because it could happen at any time, is if the bank's customers, those who hold the warehouse receipts or receive it in payment, lose confidence in the chances of the bank's repayment of the receipts and decide, en masse, to cash them in. This loss of confidence, if it spreads from a few to a large number of bank depositors, is devastating because it is always fatal. It is fatal because, by the very nature of fractional-reserve banking, the bank cannot honor all of its contracts. Hence the overwhelming nature of the dread process known as a “bank run,” a process by which a large number of bank customers get the wind up, sniff trouble, and demand their money. The “bank run,” which shivers the timbers of every banker, is essentially a “populist” uprising by which the duped public, the depositors, demand the right to their own money. This process can and will break any bank subject to its power. Thus, suppose that an effective and convincing orator should go on television tomorrow, and urge the American public: “People of America, the banking system of this country is insolvent. ‘Your money’ is not in the bank vaults. They have less than 10 percent of your money on hand. People of America, get your money out of the banks now before it is too late!” If the people should now heed this advice en masse, the American banking system would be destroyed tomorrow.7

A bank's “customers” are comprised of several groups. They are those people who make the initial deposit of cash (whether gold or government paper money) in a bank. They are, in the second place, those who borrow the bank's counterfeit issue of warehouse receipts. But they are also a great number of other people, specifically those who accept the bank's receipts in exchange, who thereby become a bank's customers in that sense.

Let us see how the fractional-reserve process works. Because of the laxity of the law, a deposit of cash in a bank is treated as a credit rather than a bailment, and the loans go on the bank's balance sheet. Let us assume, first, that I set up a Rothbard Deposit Bank, and that at first this bank adheres strictly to a 100-percent reserve policy. Suppose that $20,000 is deposited in the bank. Then, abstracting from my capital and other assets of the bank, its balance sheet will look as in Figure 4: 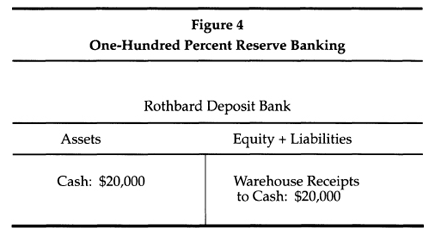 So long as Rothbard Bank receipts are treated by the market as if they are equivalent to cash, and they function as such, the receipts will function instead of, as surrogates for, the actual cash. Thus, suppose that Jones had deposited $3,000 at the Rothbard Bank. He buys a painting from an art gallery and pays for it with his deposit receipt of $3,000. (The receipt, as we shall see, can either be a written ticket or an open book account.) If the art gallery wishes, it need not bother redeeming the receipt for cash; it can treat the receipt as if it were cash, and itself hold on to the receipt. The art gallery then becomes a “customer” of the Rothbard Bank.

It should be clear that, in our example, either the cash itself or the receipt to cash circulates as money: never both at once. So long as deposit banks adhere strictly to 100-percent reserve banking, there is no increase in the money supply; only the form in which the money circulates changes. Thus, if there are $2 million of cash existing in a society, and people deposit $1.2 million in deposit banks, then the total of $2 million of money remains the same; the only difference is that $800,000 will continue to be cash, whereas the remaining $1.2 million will circulate as warehouse receipts to the cash.

Suppose now that banks yield to the temptation to create fake warehouse receipts to cash, and lend these fake receipts out. What happens now is that the previously strictly separate functions of loan and deposit banking become muddled; the deposit trust is violated, and the deposit contract cannot be fulfilled if all the “creditors” try to redeem their claims. The phony warehouse receipts are loaned out by the bank. Fractional-reserve banking has reared its ugly head.

Thus, suppose that the Rothbard Deposit Bank in the previous table decides to create $15,000 in fake warehouse receipts, unbacked by cash, but redeemable on demand in cash, and lends them out in various loans or purchases of securities. For how the Rothbard Bank's balance sheet now looks see Figure 5: 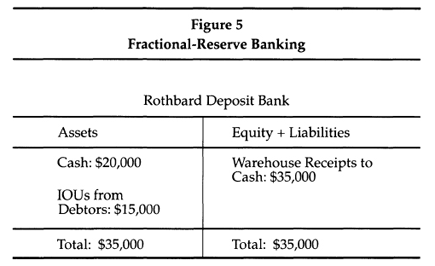 In this case, something very different has happened in a bank's lending operation. There is again an increase in warehouse receipts circulating as money, and a relative decline in the use of cash, but in this case there has also been a total increase in the supply of money. The money supply has increased because warehouse receipts have been issued that are redeemable in cash but not fully backed by cash. As in the case of any counterfeiting, the result, so long as the warehouse receipts function as surrogates for cash, will be to increase the money supply in the society, to raise prices of goods in terms of dollars, and to redistribute money and wealth to the early receivers of the new bank money (in the first instance, the bank itself, and then its debtors, and those whom the latter spend the money on) at the expense of those who receive the new bank money later or not at all. Thus, if the society starts with $800,000 circulating as cash and $1.2 million circulating as warehouse receipts, as in the previous example, and the banks issue another $1.7 million in phony warehouse receipts, the total money supply will increase from $2 million to $3.7 million, of which $800,000 will still be in cash, with $2.9 million now in warehouse receipts, of which $1.2 million are backed by actual cash in the banks.

The answer is the fear of insolvency; and the most devastating route to insolvency, as we have noted, is the bank run. Suppose, for example, that the banks go hog wild: the Rothbard Bank issues many millions of fake warehouse receipts; the banking system as a whole issues hundreds of millions. The more the banks issue beyond the cash in their vaults, the more outrageous the discrepancy, and the greater the possibility of a sudden loss of confidence in the banks, a loss that may start in one group or area and then, as bank runs proliferate, spread like wildfire throughout the country. And the greater the possibility for someone to go on TV and warn the public of this growing danger. And once a bank run gets started, there is nothing in the market economy that can stop that run short of demolishing the entire jerry-built fractional-reserve banking system in its wake.

Apart from and short of a bank run, there is another powerful check on bank credit expansion under fractional reserves, a limitation that applies to expansion by any one particular bank. Let us assume, for example, an especially huge expansion of pseudo-warehouse receipts by one bank. Suppose that the Rothbard Deposit Bank, previously hewing to 100-percent reserves, decides to make a quick killing and go all-out: upon a cash reserve of $20,000, previously backing receipts of $20,000, it decides to print unbacked warehouse receipts of $1,000,000, lending them out at interest to various borrowers. Now the Rothbard Bank's balance sheet will be as in Figure 6: 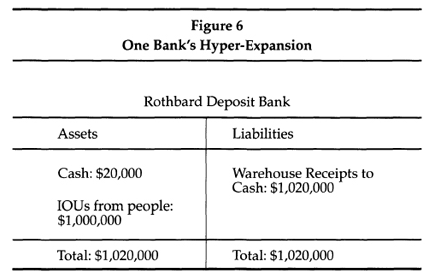 Suppose, for example, that the Ace Construction Company pays $1 million to the Curtis Cement Company. And the Curtis Cement Company, for some reason, doesn't use banks; it presents the receipt for $1 million to the Rothbard Bank and demands redemption. What happens? The Rothbard Bank, of course, has peanuts, or more precisely, $20,000. It is immediately insolvent and out of business.

More plausibly, let us suppose that the Curtis Cement Company uses a bank, all right, but not the Rothbard Bank. In that case, say, the Curtis Cement Company presents the $1 million receipt to its own bank, the World Bank, and the World Bank presents the receipt for $1 million to the Roth-bard Bank and demands cash. The Rothbard Bank, of course, doesn't have the money, and again is out of business.

Note that for an individual expansionist bank to inflate warehouse receipts excessively and go out of business does not require a bank run; it doesn't even require that the person who eventually receives the receipts is not a customer of banks. This person need only present the receipt to another bank to create trouble for the Rothbard Bank that cannot be overcome.

For any one bank, the more it creates fake receipts, the more danger it will be in. But more relevant will be the number of its banking competitors and the extent of its own clientele in relation to other competing banks. Thus, if the Rothbard Bank is the only bank in the country, then there are no limits imposed on its expansion of receipts by competition; the only limits become either a bank run or a general unwillingness to use bank money at all.

On the other hand, let us ponder the opposite if unrealistic extreme: that every bank has only one customer, and that therefore there are millions of banks in a country. In that case, any expansion of unbacked warehouse receipts will be impossible, regardless how small. For then, even a small expansion by the Rothbard Bank beyond its cash in the vaults will lead very quickly to a demand for redemption by another bank which cannot be honored, and therefore insolvency.

One force, of course, could overcome this limit of calls for redemption by competing banks: a cartel agreement among all banks to accept each other's receipts and not call on their fellow banks for redemption. While there are many reasons for banks to engage in such cartels, there are also difficulties, difficulties which multiply as the number of banks becomes larger. Thus, if there are only three or four banks in a country, such an agreement would be relatively simple. One problem in expanding banks is making sure that all banks expand relatively proportionately. If there are a number of banks in a country, and Banks A and B expand wildly while the other banks only expand their receipts a little, claims on Banks A and B will pile up rapidly in the vaults of the other banks, and the temptation will be to bust these two banks and not let them get away with relatively greater profits. The fewer the number of competing banks in existence, the easier it will be to coordinate rates of expansion. If there are many thousands of banks, on the other hand, coordination will become very difficult and a cartel agreement is apt to break down.8