Government paper, as pernicious as it may be, is a relatively straightforward form of counterfeiting. The public can understand the concept of “printing dollars” and spending them, and they can understand why such a flood of dollars will come to be worth a great deal less than gold, or than uninflated paper, of the same denomination, whether “dollar,” “franc,” or “mark.” Far more difficult to grasp, however, and therefore far more insidious, are the nature and consequences of “fractional-reserve banking,” a more subtle and modern form of counterfeiting. It is not difficult to see the consequences of a society awash in a flood of new paper money; but it is far more difficult to envision the results of an expansion of intangible bank credit.

One of the great problems in analyzing banking is that the word “bank” comprises several very different and even contradictory functions and operations. The ambiguity in the concept of “bank” can cover a multitude of sins. A bank, for example, can be considered “any institution that makes loans.” The earliest “loan banks” were merchants who, in the natural course of trade, carried their customers by means of short-term credit, charging interest for the loans. The earliest bankers were “merchant-bankers,” who began as merchants, and who, if they were successful at productive lending, gradually grew, like the great families the Riccis and the Medicis in Renaissance Italy, to become more bankers than merchants. It should be clear that these loans involved no inflationary creation of money. If the Medicis sold goods for 10 gold ounces and allowed their customers to pay in six months, including an interest premium, the total money supply was in no way increased. The Medici customers, instead of paying for the goods immediately, wait for several months, and then pay gold or silver with an additional fee for delay of payment.

This sort of loan banking is non-inflationary regardless of what the standard money is in the society, whether it be gold or government paper. Thus, suppose that in present-day America I set up a Rothbard Loan Bank. I save up $10,000 in cash and invest it as an asset of this new bank. My balance sheet, see Figure 1, which has assets on the left-hand side of a T-account, and the ownership of or claim to those assets on the right-hand side, the sum of which must be equal, now looks as follows: 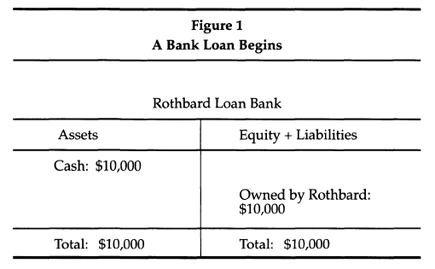 The bank is now ready for business; the $10,000 of cash assets is owned by myself.

Suppose, then, that $9,000 is loaned out to Joe at interest. The balance sheet will now look as follows in Figure 2. 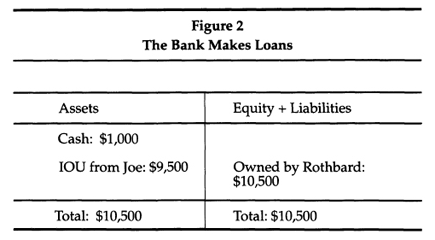 The increased assets come from the extra $500 due as interest. The important point here is that money, whether it be gold or other standard forms of cash, has in no way increased; cash was saved up by me, loaned to Joe, who will then spend it, return it to me plus interest in the future, etc. The crucial point is that none of this banking has been inflationary, fraudulent, or counterfeit in any way. It has all been a normal, productive, entrepreneurial business transaction. If Joe becomes insolvent and cannot repay, that would be a normal business or entrepreneurial failure.

If the Rothbard Bank, enjoying success, should expand the number of partners, or even incorporate to attract more capital, the business would expand, but the nature of this loan bank would remain the same; again, there would be nothing inflationary or fraudulent about its operations.

So far, we have the loan bank investing its own equity in its operations. Most people, however, think of “banks” as borrowing money from one set of people, and relending their money to another set, charging an interest differential because of its expertise in lending, in channeling capital to productive businesses. How would this sort of borrow-and-lend bank operate?

Let us take the Rothbard Loan Bank, as shown in Figure 3, and assume that the Bank borrows money from the public in the form of Certificates of Deposit (CDs), repayable in six months or a year. Then, abstracting from the interest involved, and assuming the Rothbard Bank floats $40,000 of CDs, and relends them, we will get a balance sheet as follows:

Again, the important point is that the bank has grown, has borrowed and reloaned, and there has been no inflationary creation of new money, no fraudulent activity, and no counterfeiting. If the Rothbard Bank makes a bad loan, and becomes insolvent, then that is a normal entrepreneurial error. So far, loan banking has been a perfectly legitimate and productive activity.