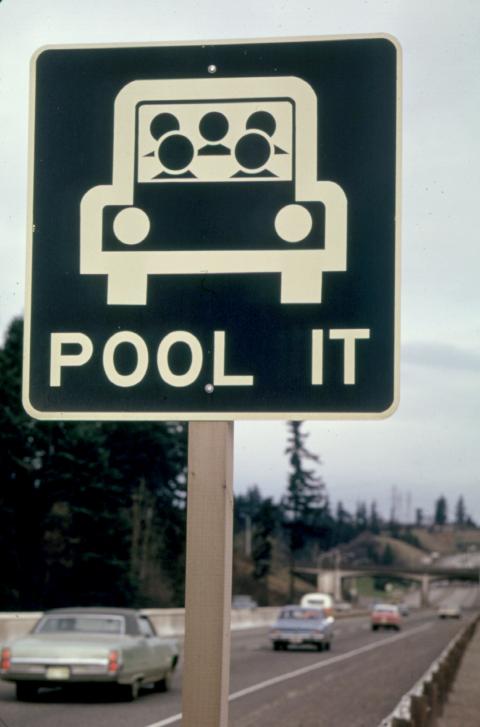 Propose that energy needs be met through more production, and up will go the cry from the left: not production but conservation! Have these people had a new idea since the New Deal?

In 1943, the Government Printing Office for the Office of Price Administration made a placard that read: "When you ride ALONE you ride with Hitler!" Hence, supporting the war effort meant saving gas and thus carpooling.

The idea that a person who did not join a "car-sharing" club was as wretched as a Nazi is comical to our ears today. But it was meant as serious business in those days. In other words, solo driving was equated with being a Nazi sympathizer.

By looking back to the "driving with Hitler" days, we can acknowledge that the demand to conserve gas is old hat. The government has never thought much of the American habit of driving alone, and thereby "wasting" fuel. Back then, the excuse was the war; today it is the environment and the campaign against consumerism.

Beyond these old tropes, government holds a certain rancor towards the fact that individuals have certain freedoms -- freedom of thought, mobility, and supposedly, freedom from government tyranny. Government's goal, therefore, is to limit the freedom of its subjects. And what better way to rob one's subjects of freedom than to limit their mobility?

Carpooling had its greatest success during Jimmy Carter’s 1970s "energy crisis," and continued to gain popularity into the 1980s. Under the guise of crisis, government staged this politically motivated urgency, attempting to gain support from individuals for giving up some freedom in order to gain more security. This, the government told us, was necessary for maintaining our current way of life. The government, of course, was going to give us a more secure future in terms of resource management, if we would only allow it to dictate to us how that would be done.

People started scrambling to conserve gas, fearful of their ability to come and go as they pleased in future years. Under pressure, the automakers clambered to build smaller, more fuel-efficient cars that a buying public did not want to drive.

However, busy lives and priorities soon caused the carpool movement to struggle for support, as people became more aware of time-management issues. After all, the 1980's saw the rise of two-income households, daycare for the kids, soccer moms, and households in which schedules circulated around the activities of the children.

Currently, with another fabricated energy crisis looming, and with the buildup of hysteria over the rising prices of our petroleum resources, the car-sharing types are once again coming out of the woodwork. Supermoms in SUV's are harangued for putting family priorities ahead of the mass hysteria over declining natural resources.

Car-sharing, however, is hardly ever practicable. Human needs are too individualized and too unpredictable. All the hoopla over saving on car and gas expenditures via car pooling is an attempt to blast away at the prevailing automobile culture, a culture of individuals enamoured of their cars and the sovereignty that they bring to their lives.

Modern government roads, as we know, are poorly maintained, crowded, and, hence, dangerous. There are never enough lanes to accommodate all travelers in comfort and punctuality, so government planners in many cities have decided that they can better accommodate us 9-5'ers with one less lane, as they give the treasured passing lane on the left to the carpoolers adhering to government edict.

These HOV (high-occupancy vehicle) lanes are government’s attempt to provide incentive for car- sharing. They provide incentive because drivers notice that these lanes are typically much less crowded and, therefore, move along at a much faster pace. This is because government has used coercion and legal means to keep most of the road population from legally using the designated HOV lane. Therefore, the government exacerbates the bungled traffic in all other lanes so it can effectively use misery to coerce us into accepting its mandates.

The carpool movement is entirely collectivist, in fundamental principle and in form. It denotes an established superiority in giving up the pursuit of autonomy for the overall "good" of society. One notion is that the honor of and respect of Mother Earth supercedes that of man. Also, the tendency of the automobile haters is to exalt car-share alternatives as a noble solution to singular transportation, because individuality is eschewed in a collectivist State.

To understand the cast of mind that plays the carpooling stratagem, we must look at what it is that car-poolers hate about individuality. One website promoting carpooling describes the attachment to the car as "sickening" and tied to love of status symbols. It supports renouncing the ownership of a car in order to share driving with other people as being one of the "small sacrifices" that individuals need to make in order to better themselves.

Of course car ownership is part status symbol! It is status and ego and accomplishment that separate us humans from mere animals and pests. It is the desire for status and the love of beauty that urges one to covet a Chevy Corvette convertible over a Geo Metro. We desire certain clothing, shoes, hairstyles, and pets based on status. We marry for status and spend years educating ourselves to a level of rank we deem desirable. So what is it about status that must make us hang our heads in shame?

Also, the realities of carpooling are that it is too cumbersome and too unattractive as an alternative to autonomous movement. Most people are not willing to compromise their independence with others who may have similar ends, but different means in meeting those ends.

It is the sensibilities of everyday reality that compel us to maximize our freedoms and accomplish the most we can with as little effort as possible. After all, many of us run errands on the way to and from work, out of necessity and for convenience. We may stop at the store before work, the gym during lunch, or the bar after work. Or maybe we just need to get home to expedite the rest of our daily activities as quickly as possible.

Common sense tells us that we cannot afford to be tied to the schedules of others, as car-pooling requires. After all, why should those of us who enjoy our freedom be saddled with travel partners who have their own interests at heart, and not ours?

Singular ownership and use of a motor vehicle helps us to attain the personal freedom we covet. Humans maximize their potential through the exercise of basic property rights. The right of ownership of property includes being able to purchase and own any car we can afford to purchase, and then proceed to make use of that vehicle to alleviate as many of our uncertainties as we can.

This empowers us as individuals, and allows us to use resources as they suit our needs, both present and future. The consumption of resources is best played out in the marketplace, with consumers and producers interacting unencumbered by government and its micromanagement policies.

Of course, the privatization of roads is the most judicious solution to the problem of road congestion and the lack of road maintenance. Until that happens, however, government should keep out of our private lives, and keep its "Hitler" out of our cars.