Can a Principled Libertarian Go to War? | Mises Institute
Skip to main content

GET NEWS AND ARTICLES IN YOUR INBOXPrint
A
A
Home | Mises Library | Can a Principled Libertarian Go to War?

Can a Principled Libertarian Go to War?

Can a principled libertarian go to war?

To answer this question requires a definition of war itself. According to the commonly used definition, war must involve the declaration of hostilities by one state against another, in which it commits the people and resources under its jurisdiction to hostilities against the opponent's people and resources. When two individuals or small groups fight, it is called a brawl or a feud, not a war. Thus, war seems inextricably entangled with the concept of nation-states that command, to varying degrees, the wealth, property, and bodies of those within their borders.

Historian Jeffrey Rogers Hummel correctly states that in such a situation, each state actually declares war on three fronts: against the other state; against the innocent people within the other state; and against its own dissenting citizens. So, if this common definition of war applies, then it is not possible to imagine a libertarian just war.

Nevertheless, at least in theory, it is possible to imagine a war without nation-states in the same manner libertarians imagine legal and court systems without government. If the laws and courts can be divorced from a state context, the warfare can be as well. Even the quintessential isolationist, Murray Rothbard, once stated,

if you didn't have State war, if States were eliminated or if you are only talking about private marauders versus private defenders, then the situation completely changes.

Libertarianism embraces a right of self-defense that is so extreme as to allow the killing of an aggressor who uses lethal force. And nothing within libertarianism precludes the possibility of people assigning this right to a collective entity who could exercise self-defense on their collective behalf. As long as every individual that a private-defense agency claims to represent has voluntarily assigned his right of self-defense to it, then the agency is justified in acting against an invader.

Moreover, if the agency acts only against invading individuals — a.k.a. actual aggressors — all objections about innocent civilians are avoided. Thus, at least in theory, libertarianism seems to accept the possibility of a just war. (Of course, this does not necessarily justify any war that has ever occurred in human history, but it opens the possibility of a just war in the future.)

"You cannot run a cost-benefit analysis on killing innocents without stepping outside of libertarianism."

But what would a libertarian war look like? Despite self-defense provisions, libertarianism is based on individualism and nonaggression, which makes a collective blast of libertarian force difficult to envision.

Fortunately, the idea of a "just war" is well-trodden ground for Christian theorists, with some of whom libertarians can make an easy alliance on this subject. In his book War and Conscience, the minister Allen Isbell asks,

When and how may a State legitimately engage in a war? This has been a prime topic of discussion in Christian ethics for sixteen centuries. From this continuing conversation within Christendom, a doctrine of justifiable war has evolved.

Allen goes on to list eight Christian requirements for a just war: it must be the last resort; you must be on the side that is justified in fighting; it must have adequate cause; it must have a legitimate aim; the war must be waged with a proper spirit; it must be waged by a proper authority; the execution must be just; and it must promise beneficial victory.

What would be the libertarian requirements for a just war? They would include the following, at least:

Some libertarians would shift the ground of argument on "the civilian problem" to utilitarianism. If an enemy is willing to use indiscriminate weaponry, they argue, we must respond in kind or be devastated. I make no comment here on whether this argument is true. Instead, I strongly suggest that those who make it should explicitly abandon the label of "libertarianism." Libertarianism is the political system organized around the principle and the means of nonaggression; you cannot run a cost-benefit analysis on killing innocents without stepping outside of libertarianism. The boundaries of its theory are not flexible enough to embrace the murder of innocents as collateral damage.

Many consider the foregoing to be an ivory-tower position. They argue that, when your life is threatened, you have a right to respond defensively, even if that response entails firing into a crowd and thus harming or killing innocent people: the responsibility lies with the aggressor, not with you.

If this argument is true, an interesting question of math arises. How many bystanders am I justified in murdering in order to eliminate someone trying to kill me? If I abandon the principle of not harming innocents, what standard should I use to calculate how many innocent people I may murder in the process of protecting myself? As few as necessary? What if that number comes to 20, 1,000, 10,000? What if I know the assassin is in a particular movie theater — can I blow it up to ensure my safety? And if not, why not? Once I abandon the principle of not harming innocents, we are talking about math and utility, not ethics. 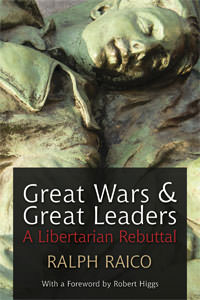 Given these requirements, a libertarian just war remains unimaginable.