GET NEWS AND ARTICLES IN YOUR INBOXPrint
A
A
Home | Mises Library | Can Bernanke Brake Without Derailing?

Can Bernanke Brake Without Derailing? 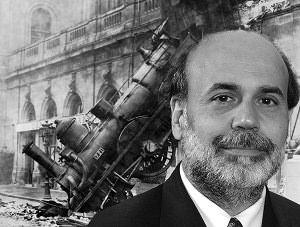 According to most commentators, reducing monetary stimulus and winding down the balance sheet of the Fed without major economic disruptions is going to be a major challenge for US central bank policy makers. On Wednesday, June 19 Fed Chairman Ben Bernanke, said that given an improved outlook on the economy, the US central bank may moderate the pace of monetary pumping. According to Bernanke, by mid-2014 the Fed may even end the purchasing of assets.

Is it possible to slow down the pace of monetary pumping without major side effects?

According to the popular way of thinking, on account of major shocks prior to 2008 emanating from disruptions in the credit markets, the US economy was severely dislocated from a path of self-sustaining economic growth.

As a result, since 2008 the Fed has had to step in with massive monetary pumping to bring the economy onto the path of economic growth.

Now in this way of thinking, the spending of one individual becomes the income of another individual whose spending in turn gives rise to the income of other individuals, etc. In the absence of shocks, this process tends to become self-sustaining. The role of the central bank here is to make sure that the process does not get disrupted and to prevent bad dynamics. (Thus if, on account of a shock, consumers curtail their spending, this could lead to an implosion in economic activity.)

Note that the central bank is expected to intervene not only in response to negative shocks but also on account of positive shocks that tend to move the economy strongly above the path of self-sustaining economic growth.

With this way of thinking if the central bank is not careful enough in its response to negative shocks, this could push the economy into a so-called “overheated” zone.

It seems that although not an easy task, experienced and wise policy makers should be able to navigate the economy away from various disruptions and keep the economy on a healthy growth path.

Hence policy makers must carefully monitor key economic data in order to make sure that the economy, once it is brought onto a self-sustaining economic growth path, stays there.

Policy makers are probably watching a few key indices. For example, the Builders Expectations Index jumped to 52 in June from 44 in May. The growth momentum of housing starts shot up in May from the month before. Year-on-year the rate of growth of starts climbed to 28.6 percent from 13.5 percent in April.

It is against this background that one can understand the logic of Ben Bernanke and his colleagues when they say that given the strengthening in economic activity and the likely strengthening in the labor market, US central bank policy makers are likely to trim the pace of monetary pumping in the months ahead.

Note again that what is required here for the successful accomplishment of the Fed’s monetary policy is the correct assessment of the future course of the US economy.

Even if one were to accept this way of thinking, the dynamics of events are never possible to predict with great accuracy. The Fed’s policy makers are likely to be in the dark as to whether the economy is approaching the self-sustaining growth path or has already surpassed this path and has entered a rising inflationary path.

Note that policy errors are likely to add to various shocks that these policy measures are meant to counter. (The key policy measures of the Fed are monetary pumping and interest rate manipulations.)

On this score, whenever the Fed changes the pace of pumping, the effect on various markets is not instantaneous. The newly injected money moves from one market to another market and there is a time lag.

For some markets, the time lag is short; for other markets it can be very long. Whenever the new money enters a market, it means that now more money is chasing a given amount of goods in that market. The monetary expenditure, or the monetary turnover, in the particular market is now higher.

Given that the time lags are variable, various indicators such as price indices might be responding to changes in monetary policy that took place several years earlier.

Hence a situation could emerge that on account of the variability in the time lags, there could be a variety of responses in various indicators at a given point in time. (For instance a strengthening in the yearly rate of growth of the CPI whilst economic activity is declining.)

We know that Fed policy makers tend to be—most of the time—reactive to changes in economic indicators, which means that most of the time policy makers are responding to past policies. (It is like a dog chasing its own tail.) Needless to say that such types of policies tend to amplify rather than mitigate shocks.

We are of the view that the entire framework of thinking regarding the existence of some kind of a growth path that the Fed supposedly could navigate the economy onto is erroneous. There is no such thing as an economy as such, apart from individuals that are engaged in various activities to maintain their lives and well-being.

Whenever the central bank raises the pace of monetary pumping in order to bring the economy onto a self-sustaining growth path, it in fact sets the stage for various non-productive bubble activities. The increase in these activities, which is hailed as economic prosperity, sets in motion the diversion of real wealth from wealth generators toward bubble activities. It weakens the process of wealth generation.

Obviously then there is no way that the Fed could somehow curb the monetary pumping without setting in motion an economic bust. It would contradict the law of cause and effect. The severity of the bust is in accordance with the percentage of bubble activities out of overall activities. The larger this percentage is the greater the bust is going to be.

This percentage in turn is dictated by the magnitude and the length of the loose monetary stance of the Fed. Once this percentage gets out of hand the pool of real wealth comes under pressure. Consequently, banks’ willingness to engage in the expansion of lending despite the central bank’s loose stance is reduced. This leads to a decline in the growth momentum of the supply of credit out of “thin air,” which in turn leads to the decline in the growth momentum of money supply. After a time lag this works toward a decline in economic activity, i.e., sets in motion an economic bust.

Meanwhile after closing at minus 1.4 percent in September 2012 the yearly rate of growth of the Fed’s balance sheet jumped to almost 20 percent in June. On account of banks reluctance to lend (surplus cash stood at $1.963 trillion in June) the downtrend in the growth momentum of US AMS remains intact. (After closing at 14.8 percent in November 2011 the yearly rate of growth stood so far in June at 7.7 percent). We suggest this has already set in motion an economic bust.

According to most commentators, although not an easy task, experienced and wise policy makers should be able to navigate the US economy away from various bad side effects that come in response to a tighter Fed stance. We suggest that whenever the Fed raises the pace of monetary pumping in order to “revive” the economy it in fact creates a supportive platform for various non-productive bubble activities that divert real wealth from wealth generators. Whenever the US central bank curbs the monetary pumping this weakens the diversion of real wealth and undermines the existence of bubble activities—it generates an economic bust. We suggest that there is no way that the Fed can tighten its stance without setting in motion an economic bust. This would defy the law of cause and effect.