GET NEWS AND ARTICLES IN YOUR INBOXPrint
A
A
Home | Mises Library | Boom, Bust, and Gold 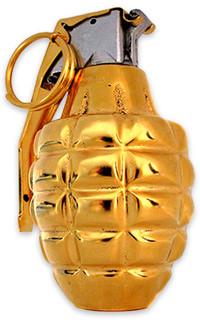 In his interview with the CNBC on November 9, 2010, a highly regarded Wall Street economist, Nouriel Roubini, the cofounder and chairman of Roubini Global Economics, said that a gold standard is unlikely to stabilize the financial system. On the contrary, holds Roubini, such a standard can only make things much worse.

For instance, argues Roubini, an economy that is growing quickly would tend to overheat and this in turn is likely to lead to a higher inflation and asset bubbles.

In contrast, an economy that is growing more slowly would have a tendency toward deflationary pressure and recession.

On a gold standard, argues Roubini, the central bank will not be able to successfully counterbalance these tendencies. An economy on a gold standard would continue to reinforce the existing negative trends in the business cycle, he maintains.

In a nutshell, according to Roubini the gold standard limits the range of actions that central banks can introduce in order to improve economic growth and employment and manage price stability.

For most economists, another major problem with having a gold standard is that the supply of gold will not grow fast enough to accommodate the rate of increase in the supply of goods and services generated by modern economies. It is held that this can only suffocate economies.

Let us start with a barter economy. John the miner produces ten ounces of gold. The reason why he mines gold is that he believes there is a market for it. Gold contributes to the well-being of individuals. He exchanges his ten ounces of gold for various goods such as potatoes and tomatoes.

People have discovered that gold, apart from being useful in making jewelry, is also useful for some other applications. They now assign a much greater exchange value to gold than before. As a result John the miner can exchange his ten ounces of gold for more potatoes and tomatoes.

Note that as time goes by people assign greater importance to some goods and diminish the importance of some other goods. Some goods are now considered as more important than other goods in supporting people's lives and well-being.

Now people have also discovered that gold is useful to serve as the medium of exchange. Consequently they further lift the price of gold in terms of tomatoes and potatoes. Gold is now predominantly demanded as a medium of exchange — the demand for the other services of gold such as ornaments is now much lower than before.

One of the reasons for selecting gold as the medium of exchange is that it is relatively scarce. This means that a producer of a good who has exchanged this good for gold expects the purchasing power of his effort to be preserved over time by holding gold.

If for some reason there were a large increase in the production of gold and this trend were to persist, the exchange value of gold would be subject to a persistent decline versus other goods, all other things being equal.

Within such conditions people are likely to abandon gold as the medium of the exchange and look for other commodities to fulfill this role.

As the supply of gold starts to increase, its role as the medium of exchange diminishes while the demand for it for some other usages is likely to be retained or increase.

When John the miner exchanges gold for goods, he is engaged in an exchange of something for something. He is exchanging wealth for wealth.

Contrast all this with the printing of gold receipts, i.e., receipts that are not backed 100 percent by gold. This is an act of fraud — that is what inflation is all about — which is another way of saying that it sets a platform for consumption without making any contribution to the pool of real wealth.

Empty certificates set in motion an exchange of nothing for something, which in turn leads to boom-bust cycles.

The printing of certificates unbacked by gold diverts real savings from wealth-generating activities to the holders of the unbacked certificates. This leads to a so-called economic boom.

Obviously then, without the unbacked money, which diverts real savings to them, they are in trouble. These activities didn't produce any wealth, hence without money given to them they cannot secure the goods they want.

In the case of the increase in the supply of gold no fraud is committed here. The supplier of gold — the gold mine — has increased the production of a useful commodity. So in this sense we don't have an exchange of nothing for something.

Consequently we also don't have the emergence of bubble activities. Again the wealth producer, because he has produced something useful, can exchange it for other goods. He doesn't require empty money to divert real wealth to him.

"Empty certificates set in motion an exchange of nothing for something, which in turn leads to boom-bust cycles."

We can thus conclude that the gold standard, if not abused, is not conducive to boom-bust cycles.

We have seen that it is the creation of money out of thin air that sets in motion boom-bust cycles. Hence the key supplier of such money — the central bank — cannot be an agent of economic stability as suggested by most mainstream economists.

In a free unhampered market economy (without the central bank) we could envisage that the economy would be subject to various shocks, but it is difficult to envisage a phenomenon of recurrent boom-bust cycles.

Before the Industrial Revolution in approximately the late 18th century, there were no regularly recurring booms and depressions. There would be a sudden economic crisis whenever some king made war or confiscated the property of his subjects; but there was no sign of the peculiarly modern phenomena of general and fairly regular swings in business fortunes, of expansions and contractions.1

In short, the boom-bust-cycle phenomenon is somehow linked to the modern world. But what is the link?

Careful examination reveals that the link is in fact the modern banking system, which is coordinated by the central bank.

The source of recessions turns out to be the alleged "protector" of the economy: the central bank itself.

Observe that inflation is not about a general increase in the prices of goods and services but about increases in money supply.

As a rule, increases in money supply, i.e., inflation, result in general increases in prices. (Note that a price is the amount of money paid per unit of a good.)

Now, if for a given money supply there is an increase in the production of goods — strong economic growth — obviously this will lead to a fall in general prices and not increases in prices as suggested by Roubini.

Likewise, a fall in economic activity as such doesn't cause deflation and economic slump as suggested by Roubini and mainstream economists. As long as the money supply is not shrinking there is no way one can have deflation.

We have seen that on a gold standard, money, which is gold, cannot disappear. Only on the paper standard and in the framework of the fractional-reserve lending can money disappear.

Note that the disappearance of money on the paper standard is always in response to the previous monetary inflation of the central bank, which undermines the pool of real savings — the bottom line of the economy.

It is the fall in the pool of real savings that leads to the weakening in the real economy, which in turn causes banks to curtail the expansion of credit out of thin air.

Does a Growing Economy Require an Expanding Money Supply?

Most economists believe that a growing economy requires a growing money stock, on the grounds that growth gives rise to a greater demand for money, which must be accommodated.

Failing to do so, it is maintained, will lead to a decline in the prices of goods and services, which in turn will destabilize the economy and lead to an economic recession, or even worse, depression.

Now on a gold standard if one takes into account that a large portion of gold mined is used for jewelry, this leaves the stock of money almost unchanged over time.

It is held then that the free market, by failing to provide enough gold, can cause money-supply shortages. This in turn, runs the risk of destabilizing the economy.

The whole idea that money must grow in order to sustain economic growth gives the impression that money somehow sustains economic activity.

If this were the case, then most third-world economies would have eliminated poverty by now through printing large quantities of money.

Money, per se, cannot be consumed and cannot be used directly as a producers' good in the productive process. Money per se is therefore unproductive; it is dead stock and produces nothing.2

Money's main job is simply to fulfill the role of the medium of exchange. Money doesn't sustain or fund real economic activity.

Hence within the framework of a free market, there cannot be such thing as "too little" or "too much" money. As long as the market is allowed to clear, no shortage of money can emerge.

Consequently, once the market has chosen a particular commodity as money, the given stock of this commodity will always be sufficient to secure the services that money provides.

As the operation of the market tends to determine the final state of money's purchasing power at a height at which the supply of and the demand for money coincide, there can never be an excess or deficiency of money. Each individual and all individuals together always enjoy fully the advantages which they can derive from indirect exchange and the use of money, no matter whether the total quantity of money is great, or small. … The services which money renders can be neither improved nor repaired by changing the supply of money. … The quantity of money available in the whole economy is always sufficient to secure for everybody all that money does and can do.3

We have shown that a pure gold standard is not conducive to business cycles. Contrary to mainstream economists, we suggest that it is the attempts of the central banks to bring about price stability and full employment that set in motion the menace of boom-bust cycles.

The mainstream view that during an economic slump it is OK for the central bank to pump money in order to revive the economy confuses money with funding.

Printing more money cannot generate more goods and services; it can only redistribute the existing wealth from wealth generators to the holders of newly printed money.

In the process this undermines the pool of real funding and weakens wealth generators' ability to grow the economy.