GET NEWS AND ARTICLES IN YOUR INBOXPrint
A
A
Home | Mises Library | Is Bad Weather Behind Weak US Economic Trends?

Is Bad Weather Behind Weak US Economic Trends? 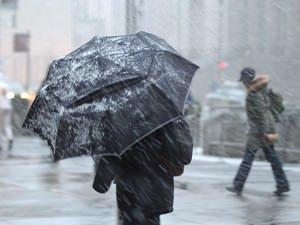 Some key US economic data shows visible weakening. The National Association of Home Builders/Wells Fargo sentiment index slumped to 46 in February from 56 in January.

The New York Federal Reserve Bank’s Empire State general business conditions index fell to 4.48 in February from 12.51 the month before.

Furthermore, the Philadelphia Fed business index fell to minus 6.3 in February from 9.4 in January.

Most economic commentators blame the weakening in economic data on bad weather conditions that have gripped much of the US. On this way of thinking the economy remains strong and short setbacks are on account of consumers and businesses putting off purchases. However, this should reverse, so it is held, once the weather improves.

There is no doubt that weather conditions can cause disruptions in economic activity. However, we hold that the recent weakening in the data could be in response to the emerging economic bust brought about by a decline in the growth momentum of money supply (see more details below).

Also, we suggest that the phenomena of recessions is not about the weakness of the economy as depicted by various economic indicators, but about the liquidation of various activities that sprang up on the back of the increase in the rate of growth of money supply. Here is why.

The expansion in the activities that sprang-up on the back of rising money supply is what an economic “boom," or false economic prosperity, is all about.

Note that once there is a strengthening in the pace of monetary expansion, irrespective of how strong and big a particular economy is, the pace of the diversion of real wealth is going to strengthen. Once, however, a slowdown in that pace of monetary expansion emerges, this slows down the diversion of real wealth from wealth producers to non-wealth producers.

This means that various bubble activities or non-productive activities are now getting less support from the money supply, and they fall into trouble.

A weakening in bubble activities is what a recession is all about. Irrespective of how big and strong an economy is, a decline in the rate of growth in money supply is going to undermine various uneconomic activities that sprang-up on the back of the previous increase in the money supply.

This means that recessions or economic busts have nothing to do with the so-called strength of an economy, improved productivity, or better inventory management by companies.

For instance, as a result of a loose monetary stance on the part of the Fed and the subsequent expansion in the money supply rate of growth various false activities emerge.

Having established that recessions are about the liquidations of unproductive activities, why are they recurrent? The reason for this is the central bank’s ongoing policies that are aimed at fixing the unintended consequences that arise from its earlier attempts at stabilizing the so-called economy.

On account of the time lags from changes in money to changes in economic activity the central bank or the Fed is forced to respond to the effects of its own previous monetary policies. These responses to the effects of past policies give rise to the fluctuations in the rate of growth of money supply and in turn to recurrent boom–bust cycles.

Given the fact that there is a time lag between changes in money and changes in economic activity it is quite likely that the increase in the growth momentum of AMS during June 2010 to October 2011 is still dominating the economic scene.

As time goes by however, we suggest that a fall in the growth momentum of AMS during October 2011 to January 2014 can be expected to assert its dominance. This will be mirrored by the decline in bubble activities and in turn in various economic activity indicators. 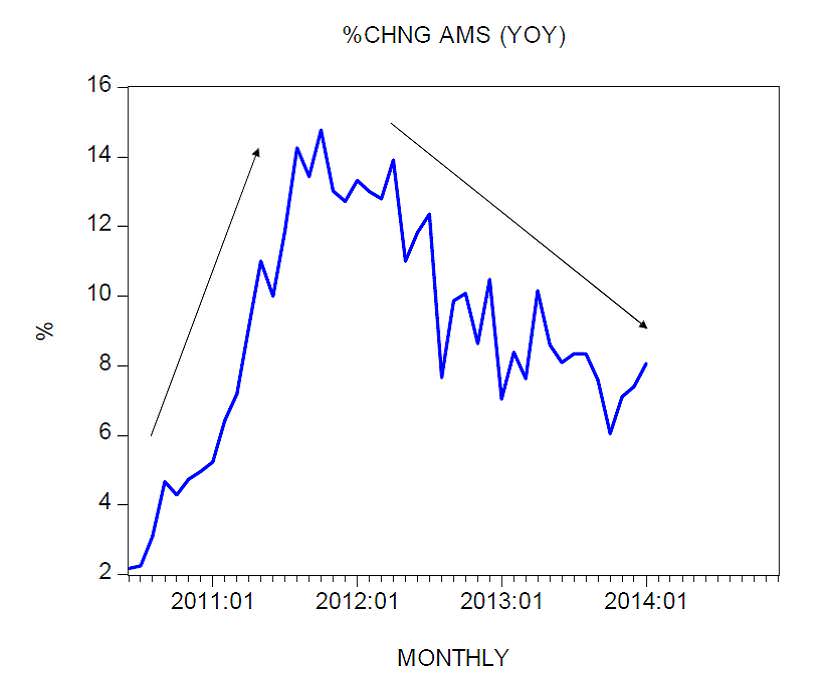