Atlas Shrugged: Sanitized and On the Fly | Mises Institute
Skip to main content

GET NEWS AND ARTICLES IN YOUR INBOXPrint
A
A
Home | Mises Library | Atlas Shrugged: Sanitized and On the Fly

Atlas Shrugged: Sanitized and On the Fly 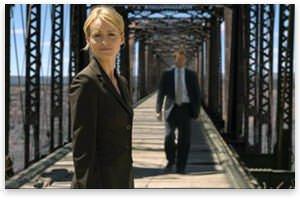 Receiving all of the Atlas Shrugged: Part I guerilla marketing via email and Facebook, I was under the impression that the buzz was overwhelming for the screen adaption of Ayn Rand's massive novel. I have a certain affection for the book and very much looked forward to the movie, because it was a confluence of two events in my life: Murray Rothbard's urging me to read Atlas back in 1990; and the uttering, a decade later, of "Who is John Galt?" by Mystic Mona™ (before she was a mystic) to my intended, which ultimately brought my girl and me together.

So last Saturday, I ordered up two tickets on Fandango so as not to be sold out for the first Sunday showing in Columbus, Georgia, the closest theater running Atlas Part I.

It turned out that paying the convenience fee as insurance was not necessary. In my mind I had imagined crowds of moviegoers in "Galt's Gulch" T-shirts, ladies dazzling, donning their best dollar-sign jewelry. I thought I would find the theater by spotting the cloud of cigarette smoke wafting from the parking lot, as Rand look-alikes waved cigarette holders, cocking their heads skyward and blowing rings of smoke into the air.

The gathering for the 1:00 p.m. show looked to be four or five middle-aged couples that maybe had read the book and didn't have church obligations. Evidently, the soldiers at nearby Fort Benning were on important maneuvers last Sunday.

Either way, the best theater I've ever been to, a creation of capitalist genius, was virtually empty. Finally, a cinema with the box office and the concession stand combined — so smart and efficient. Maybe the big-screen movie business will survive. But if the industry is relying on the Atlas Shrugged trilogy, it won't.

Brian Doherty gives the back story as to how this last-ditch, Hail Mary of a movie was filmed in 27 days with $10 million. "Racing frantically against the clock," writes Doherty, "the team was still scouting for locations with only three days left before shooting ended. Some locations were found only the day before they were used; some actors were cast just two days before they went on camera."

And it shows. Ayn Rand's ego kept the film from being made when it should have been, because she wouldn't give up control; and John Aglialoro's wife goaded him into making a film when he shouldn't have. He doesn't make movies; he excels in private equity and is the CEO of Cybex exercise equipment.

The movie is being described as good to great by a number of libertarians, but there's a reason it's grabbing only 7 percent on Rotten Tomatoes, as opposed to, say, 96 percent for The Social Network.

However, some of the negative reviews are not all that negative. This is no left-wing movie-critic conspiracy.

There is no reason to provide a broad review of the film. P.J. O'Rourke has done it best to my view. As he says, "the uninitiated will feel they've wandered without a guide into the midst of the elaborate and interminable rituals of some obscure exotic tribe."

For those familiar with Rand's book, the movie looks like it was done on the fly and sanitized for the 21st century. For instance, Ayn Rand was a passionate smoker. "Smoking is a symbol of the fire in the mind." And her characters constantly smoked. The dollar-sign cigarettes are an important plot device. In the book, Hugh Akston offers Dagny a cigarette that she accepts and smokes — a cigarette so good she saves the butt, which has a dollar sign on it.

None of the principle characters in Atlas Shrugged: Part I smokes, except Hugh Akston (Michael O'Keefe), who looks like he's nervously lighting up for the first time. There is only a momentary shot of the dollar sign on the cigarette butt, so only Atlas fans with their antennae fully deployed will pick this up.

There's plenty of drinking in the movie, but ice must be scarce. Maybe that's gone by the wayside with $37.50 per gallon gas. But it's all martinis up and whiskey neat throughout the movie, except when Dagny meets Francisco d'Anconia for cocktails.

They have red wine in front of them, with the pours far too generous for a lounge. The place is swanky, but the glasses are not Riedel quality. Neither takes even a sip. Later, Dagny meets with Hank Rearden for dinner in a high-end restaurant and is served white wine in the same stemware; again she doesn't drink.

And what swashbuckling entrepreneur has an office like Hank's at Rearden Steel? It's like a museum with an incredibly high ceiling and no one around, just Hank's lonely desk. There is no sign of commerce. No hustle and bustle. When we do finally see an employee outfitted in a modern, handless, wireless phone apparatus, she tells Hank he has three phone messages, written on rectangular slips of paper from a phone-message book that could have come from Office Depot. It's supposed to be 2016!

The moviemaker tries to jump start the sexual chemistry between Dagny and Hank earlier than Rand did, but Taylor Schilling and Grant Bowler are no Bogey and Bacall. These two act like they are interviewing each other, instead of wanting to jump each other's bones.

Michael Lerner makes for a smarmy enough Wesley Mouch, and Graham Beckell's Ellis Wyatt reminds me of many real-life entrepreneurs: type-A personality, not polished but down-to-earth, and instinctively smart. In comparison, Hank and Dagny are the perfectly quaffed Ken & Barbie — and just as plastic.

For the most part, the characters are as stiff and one-dimensional as Rand wrote them. I'm not sure how Mr. First Nighter would have weighed in on Atlas Shrugged: Part I. I think Murray might have liked Edi Gathegi's portrayal of Eddie Willers: earnest, efficient, and loyal. And the fact that the movie was finally made would give him joy. But while the movie certainly features heroes versus villains, it does not feature what he loved: action, crisp dialogue, and a good plot.

For those who want to support the Atlas-trilogy project, it won't hurt to donate a few bucks for a ticket and 102 minutes of your time. Then, after you see it, watch Rothbard's "Mozart was a Red" on YouTube. It puts Rand's great work in perspective and is just fun to watch, which is what the movie should be.