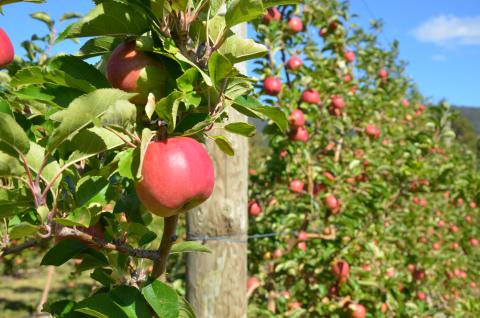 Think of a Red Delicious apple. It is the poster-child for the apple family, perfect for a teacher’s desk, a kid’s lunchbox, or bobbing in the autumn. I don’t know anyone who has actually ever bobbed for apples, but plenty of people buy Red Delicious. And I don’t know why.

Red Delicious is to apples what Milwaukee's Best is to beer, what Boone's Farm is to wine, and what the McNugget is to poultry. They are mealy, thick-skinned, and bland. In Asia the Red Delicious is nicknamed "snake fruit."

One method is through tariffs. Last year, for example, our government instituted a 52-percent import duty on most Chinese apple juice.1 Supporters say the tax is needed to offset a flood of low-priced concentrate that started arriving on the West Coast in 1999. But what’s wrong with cheap juice? Instead, after adopting the juice tariff last year, U.S. consumers have paid an excess $91 million for the product.2 The money has unjustly enriched our domestic apple producers, now comfortably insulated from competition.

Apples might be a particularly tart example of U.S. anticompetitiveness, but they are hardly the only illustration of U.S. agricultural policies that hurt consumers, inflate prices, and alienate other countries.

Take the case of milk. Americans currently pay two and a half times the world market price for a gallon of milk.3 This is thanks to federal regulations that permit states to establish local milk cartels and thus keep less expensive milk out of the grocery store. In fact, Americans are overpaying twice for the commodity: They pay once at the supermarket and again on tax day, after which dairy farmers skim $2 billion in cash subsidies from the federal budget.

Sugar is no sweet deal for Americans, either. We pay three times the world market price4 because our government imposes strict tariffs on cheaper foreign sugar. The law also limits the amount of sugar U.S. companies are permitted to process. For fat-cat U.S. sugar moguls, the policy is like stealing candy from a baby. They have extracted a sweet $9.5-billion windfall from American consumers since 1996, according to the General Accounting Office.

I could go on longer about peanut crop policies that shell consumers for $400 million a year,5 corn subsidies without a kernel of logic, and wheat rules that chaff us every time we step into a food market, convenience store, or restaurant. All told, American consumers pay $272 billion more for food products a year, courtesy of U.S. agricultural regulations that boost everyday prices.

Returning to apples, there is a lesson to be learned from the Chinese. Half a century of communist controls over Chinese agriculture yielded only suffering, shortages, frustration, and even starvation. It was only by dispensing with most government controls, price supports, and subsidies in 19846 that apple production there expanded.

In fact, Chinese apple production has exploded. Today, China is the world’s largest producer. They eclipsed our orchards in 1998. And they don’t grow Red Delicious.

Comparing our two nations’ policies, it makes me wonder where today’s anticapitalists are really holed up. "Your country tells the world that you favor free trade, but these rules [apple and steel tariffs] make that position difficult for us to accept," a Yunnan province exporter told me.

Indeed, while the Chinese have adopted laissez-faire agricultural policies, our government still tries to regulate everything that grows, grazes, or flowers. It’s an easy job, since more Americans continue to work as bureaucrats for the U.S. Department of Agriculture than till the land east of the Mississippi.7

Congress isn’t helping much, either. They just inserted in this year’s budget a $75-million straight cash subsidy for apple growers.8 The provision9 allows some firms to pluck $275,000 from the taxpayer money tree.

The apple juice-concentrate tariff is set to be extended this month if it is not reviewed.10The Bush administration should put an end to this and other wasteful agricultural policies that raise food prices for our families and irritate our neighbors.