Another Genius Idea from Central Planning

Just when employers were getting less fearful about what President Obama might do next to worsen the business climate, the National Labor Relations Board (now with its first Democratic majority in a decade) announced on December 14 that, under a newly proposed federal rule, private employers will be required to display pro-unionizing posters in their businesses.

"The planned rule," reported the Associated Press, "would require businesses to post notices in employee break rooms or other prominent locations to explain workers' rights to bargain collectively, distribute union literature or engage in other union activities without reprisal."

The posters don't explain that the largest reprisal against collectivized labor and unionism comes from the public by way of lower sales — and then fewer jobs — when prices of products and services are hiked in order to pay for the escalating costs of higher wages, benefits, and pensions.

In the US auto industry, for instance, unionized factory workers have paid a steep price for the public's reprisal against overcompensated employees and subsequently overpriced cars. During decades when both the US population and the domestic car market were significantly expanding, active membership in the United Auto Workers (UAW) dropped from 1.5 million in the late 1970s to 390,000 in 2010.

General Motors has lost two-thirds of its US market share, falling from nearly 60 percent in 1970 to its current 20 percent. The company now employs 52,000 hourly workers in the United States, down 89 percent from its 468,000 hourly employees in 1970.

Allowing the UAW "to ramp up costs ad infinitum" put GM at "a major cost disadvantage," states Martin Hutchinson, contributing editor of Money Morning. "The arrival and establishment of foreign-owned manufacturers in America's less unionized states — combined with the inexorable aging of GM's former and current work force — shackled GM with an impossible cost disadvantage against its competitors."

The last major strike by the UAW occurred in 1970. After that, management continually gave in to the union demands in all future contract negotiations. They promised tremendous pension benefits, lifetime healthcare benefits, huge pay increases, and onerous work rules that gave management no flexibility. GM evidently didn't have the bean counters who could extrapolate past a five-year horizon. If they had, they would have seen that they would have an unsustainable cost structure with more retirees being paid than workers on the assembly line.

As GM workers increasingly became unemployed, the jobless were relocated from the assembly lines to a "jobs bank" at a cost to GM of $130,000 a year in pay and benefits per worker — or more precisely, per nonworker.

The exact wording of this new "rights" poster from the federal government couldn't be more biased:

Employees have the right to act together to improve wages and working conditions, to form, join, and assist a union, to bargain collectively with their employers, and to choose not to do any of these activities.

The "act together" to improve things sounds so benign, normal, and sensible, like when two or three secretaries act in concert to share their thoughts about what meats, cheeses, and condiments to order for an office luncheon meeting, and discuss collectively if it's better to order pizza that's all pepperoni or if it should be half pepperoni and half plain.

There's no mention of how union people, not infrequently, "act together" to cause unemployment and inflation, to shrink work forces and destroy companies.

If anyone in the top ranks of the Obama administration had ever started a small business, the sector that creates most of America's jobs — or even if someone at the top levels of this administration had the goal of doing something more independent and commercial than existing in a publicly subsidized bureaucracy — they might understand that the last thing an entrepreneur or small-business owner wants to see on the walls of his own business is a poster that tells his workers that the boss is the problem, a union is the answer, and that strikes, grievances, seniority, and slow-downs are the best paths to job security and upward mobility.

What companies should do is display their own posters alongside the government's one-sided propaganda for unionism, for full disclosure. One could be a large map of the United States, for example, with big arrows crossing the country to show the migration patterns reported in the 2010 census: masses of people leaving heavily unionized and highly taxed regions, either by the force of joblessness or simply voting with their feet and heading off to less collectivized locales. The headline on the poster: "Wanna move?" 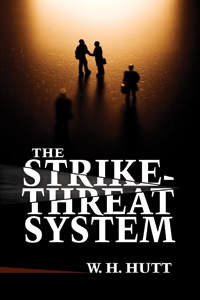 Adding to the craziness — as if we don't already have enough red ink and overpricing in government work — the aforementioned pro-unionization posters are now required to be displayed prominently in the offices of all government contractors and subcontractors. "The directive was one of the first executive orders Obama signed shortly after taking office," reported the Associated Press.

It doesn't seem to matter to Obama that the federal debt already has us $14 trillion in the hole — $140,000 per household. The answer from the Harvard masterminds is to unionize the contractors and subcontractors, to jack up the price of a mile of road to even more inflated levels.

Where's the "change"? What's new about crooked, smug, and oblivious politicians draining the lifeblood out of the nation?