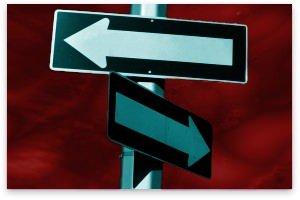 Tags The FedInterventionismMoney and Banking

Our economic policymakers stand at a crossroads. Crises like the one we face now present unique opportunities for governments to try new things, and to choose the path of the economy in the years ahead. Today, we have the opportunity to adopt policies that will encourage either future stability or future crises like the one we have now.

Government has chosen the latter: a policy of bailouts, which will only create further incentives to take those same actions that led to the current crisis in the first place. In doing so, they have ignored sound economic analysis, and even the original designs of the government institutions they are using to carry out these bailouts.

The Investment Decision and the Impact of Bailouts

All investments are speculative; that is, there is some possibility that the future will not turn out as the investor hopes, and he will take losses. Generally, when examining various investment possibilities, an investor has the option to invest in low-risk, low-return investments, which are likely to pay something, regardless the circumstances (for example, typical savings accounts). There are also high-risk, high-return investments, which are relatively likely to fail, but will pay very high returns if they succeed. (Think of investing in developing cancer drugs: odds are good that the formula will not work, or that it will not be approved by the FDA. However, if it does work and is approved, then the return will probably be very large.) Facing a menu of options that differ in terms of risk and reward, the investor will choose that which has the right mix of risk and reward for their preferences.

The possibility of bailouts changes the structure of the decision by decreasing the risk involved for certain projects. Consider a very simple "investment." Say that I offer you a bet. I will flip a coin. If it lands heads up, you give me $1. If it lands tails up, I give you $1. Now, as a mathematically-savvy person, you know that you don't really expect to get anything out of this deal. The odds of winning and losing are identical, and the size of the loss and reward are identical, so everything "cancels out" a priori. In short, when you take the bet, you're doing it for kicks. You would certainly not consider this to be an "investment" in anything like the normal sense of the term.

However, say that the government knows that your losing a dollar would disrupt the economy. After all, that's $1 that you don't spend on a highly nutritious Wendy's Frosty™. (Henry Hazlitt has something to say about this reasoning.) In fact, the government has seen these disruptions for a long time, and has a history of paying for 90% of losses on such bets. In that case, you'd have to be taking a very principled stand against gambling not to take the bet. You have the potential to gain $1, though you may lose $0.10, and the probability of each outcome is equal. The potential loss is very small compared to the original case, and compared to the reward. I'd expect that, if I made this offer to lots of people, and the government made that bailout guarantee to lots of people, I'd have lots of people making this bet. If I offered the simple case with no bailout, significantly fewer would take it. As noted by Guido Hülsmann, "the very possibility to bail out some people brings about situations in which bailouts are dearly needed."1

In this way, the bailout of the financial sector (and now Citigroup) will sow the seeds of another crisis. Banks will take more risks, knowing that the federal government will bail them out if losses result. Bank stockholders will embrace this policy, bank managers will enact it, and depositors will not resist.

The Way Things are Supposed to Work (Legally)

The bailout of Citigroup not only plants the seeds of future crises; it also violates the original design of the FDIC and Federal Reserve. In the bailout of Citigroup, the Treasury, Fed, and FDIC will all absorb part of the losses that Citigroup expects to take on about $300 billion of troubled loans. Any student of money and banking can tell you that this is not the design that their textbooks describe for these institutions.

The FDIC was designed to guarantee a certain amount of depositors' deposits in the case of a bank going bankrupt. In the bailout, the FDIC is being used to prevent the bank from going bankrupt in the first place, which is definitely not its original design. If Citigroup were allowed to go bankrupt, and the FDIC guaranteed deposits, then certain incentives would still be in place. In particular, stockholders for banks would demand that banks lend conservatively, as they would take losses—and probably significant ones—in the bankruptcy proceedings. Bank management would also have an incentive to lend conservatively, as odds are decent that they would have difficulty finding employment after they drove a bank to bankruptcy.

The Federal Reserve was designed with many purposes, one of which was to be a "lender of last resort," in which role, the Fed would help prevent the bank from running into liquidity crises (so that the bank could continue paying depositors who were withdrawing their funds). However, such would not guarantee the bank's solvency. The bank would still go bankrupt, and the resulting incentives for stockholders and bank management would still be in place.

The current plan, however, pushes both of these agencies outside of their original stated purposes, and does so in a way that destroys important incentives—the types of incentives that would have helped prevent this crisis in the first place.

The Way Things Should Work

I am no fan of the FDIC or the Federal Reserve. Their very existence weakens or eliminates an important incentive that helps guarantee the solvency of the banking system: the incentive for depositors to demand that their financial institutions operate conservatively. In a fractional-reserve system, without deposits, the banks' ability to make loans is greatly diminished. Since the fractional-reserve system creates continuous incentives for banks to lend depositors' money (thereby creating the risk of insolvency, if the loans turn out to be bad), the best we can do in such a system is be sure that there are lots of people who have incentives to keep the banks operating conservatively and who have the power to make them do so. Depositors are an important part of that equation.

However, there is an even better solution, and it has been advocated by many Austrians for a long time: 100%-reserve banking. With 100% reserves, banks need not fear for solvency. They know that they can pay their depositors back because they have the money in the safe to do so. There is no need for dramatic bank run scenes like the classic one in It's a Wonderful Life. There is no need for financial bailouts. The only insurance that banks would need is insurance against theft (which they carry anyway), and that is sufficient to protect their depositors from losses, so the FDIC can be shut down. In this case, depositors need not demand that their banks operate conservatively; they would do so by design.

The Time is Now

We stand at an unusual crossroads. At the moment, banks are holding nearly 100% reserves for transactions deposits. (As of November 19, they had about $652 billion in reserves for about $700 billion in transactions deposits.) We could implement the 100%-reserve rule now for transactions deposits, without creating much impact on the banking system. All that would happen would be that these reserves would not be lent out in the future, which would keep the banks solvent going forward. If we really want to "invest" taxpayer dollars to stabilize the financial system, why not use just $48 billion as a reserve injection, and enforce 100% reserves?

Naturally, it is better not to force taxpayers to subsidize this policy change to the benefit of the banks. However, forcing taxpayers to pay $48 billion for long-term stability is far better than forcing them to pay $1 trillion to create future crises. We have a unique opportunity to provide future stability for our banking system. Sadly, it is an opportunity that will almost assuredly pass us by.

Lucas M. Engelhardt is an associate professor of Economics at Kent State University's Stark Campus. His work is in macroeconomics, primarily in examining how various assumptions about capital affect business cycle models.