Zombie Apocalypse in a ‘DC’ Comic 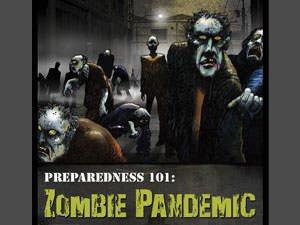 All my life I have been watching the U.S. federal government steadily increase its power, but I never expected to see it expand into the comic book business. Imagine my surprise, then, when I found a comic book — excuse me, a “graphic novella” — on the official web site of the Centers for Disease Control and Prevention, a minor masterpiece of the horror genre entitled Preparedness 101: Zombie Pandemic. Evidently the political principle “never let a good crisis go to waste” extends even to fictional crises. Perhaps inspired by its appearance in the last two episodes of the first season of AMC’s popular television show The Walking Dead, the C.D.C. decided to make its own contribution to the growing body of apocalyptic zombie narratives, and to score some propaganda points for itself in the process. Unsurprisingly, on its own web site the C.D.C. manages to do what it — or any other government institution — conspicuously fails to do in The Walking Dead, namely to come up with a quick solution to the plague and work to cure it.

The fact that the C.D.C., a unit of the U.S. Department of Health and Human Services, chose to jump on the current zombie bandwagon in American pop culture tells us something: More is at stake in these apocalyptic, “end-of-the-world-as-we-know-it” narratives than their simple shock value. For all their ghoulishness and gore, these zombie narratives raise some fundamental issues, above all the question of the relation of government to social order. Is central planning by government experts the solution to human problems (as the C.D.C.’s comic suggests), or does government intervention in human affairs generally make matters worse (as we will see The Walking Dead implies)?

The proliferation of zombie narratives represents a more general trend toward crisis scenarios in our culture, which strangely turn out to be a measure of people’s attitudes toward the state. The collapse of communism in the late 1980s left central planning discredited. Its proponents have thus been forced to find new ways of arguing for their socialist schemes, for example, disguising them under the banner of environmentalism. Would-be central planners may concede that in the normal course of events, free markets do a better job of allocating scarce economic resources, but, they argue, crises or disasters may occur on such a scale — national or even global — that only central planning by nation-states or international organizations can adequately deal with them. One might call this new phenomenon “socialism with an apocalyptic face.”

Films and television shows over the past two decades have featured stories of comets or asteroids headed for Earth, of catastrophic global warming (or cooling), of invading space aliens, of volcanic eruptions and earthquakes on a planetary scale, or viral plagues of pandemic proportions, and so on.1 Zombie narratives are only one subset of this genre of global or cosmic catastrophe narrative. Many of these stories portray ordinary people as helpless in the face of disaster. They panic or freeze or despair or in other ways make matters worse for themselves. Ordinary people are shown having to rely on elites to save them, often a combination of scientific experts and military special forces, sponsored and directed by national governments or international organizations such as the U.N.2 That is the way these apocalyptic narratives in pop culture have contributed to a kind of recuperation of socialist thinking. Individual human beings, dwarfed and overwhelmed by a global or cosmic catastrophe, are forced to turn to government to save them.

The C.D.C.’s Zombie Pandemic follows this now familiar script. The story is told largely from the perspective of an ordinary couple, named Todd and Julie, who listen to news of a zombie plague unfold in announcements from the C.D.C. on television broadcasts. The couple dutifully heeds the warning issued by the C.D.C.: “Stay in your house. Do not go outside.” This passive behavior on the part of ordinary citizens promises to be rewarded because the C.D.C. makes remarkably (one might even say unbelievably) swift progress in dealing with the zombie plague. Only a few days later, one of its doctors proclaims: “Yes, the health department sent it in Monday and we’ve managed to map the virus’ DNA. It appears to be a highly mutated form of the flu. They’ve labeled it Z5N1.” Working around the clock, the C.D.C. soon comes up with the needed countermeasure for the zombie outbreak; as one doctor announces: “We’re using the same type of vaccine that we use for the seasonal flu.” Despite the spotty record of flu vaccines, I suppose that this news is meant to be reassuring.

Todd and Julie continue to follow the directions they receive from public service announcements on the radio and accordingly head for what is labeled a “safe zone” at a nearby elementary school. County Health Department officials carefully monitor their entrance to the safe zone, where they are assured that the vaccine is on its way. Unfortunately, just as it appears that our hero and heroine will be saved, zombies converge on the school building. Faced with being overrun by zombies, the military guards balk at using their weapons: “We can’t just shoot them. These are our fellow citizens!” Evidently the C.D.C. draws the line at portraying soldiers being used to kill Americans (I guess drones were not available). The zombies smash their way into the gym where the people thought they were safe and “mass panic ensues as everyone realizes there’s no place to run.”

Just when things are beginning to look truly grim, Todd wakes up and discovers that all this was just a nightmare, brought on by his having recently watched a horror movie. But the experience has not been in vain. The story ends as Todd tells Julie: “I’ve been thinking. . . we should really make an emergency kit in case something happened. What if we were stuck in the house or had to evacuate? We need to have a plan!” With its use of the old “it was just a dream” convention, Zombie Pandemic is not going to win any awards at comic book conventions. But it does manage to get across the message the C.D.C. wishes to promote.3Faced with any major disaster, ordinary citizens need to rely on government authorities and institutions to save them, and in particular they must follow official instructions to the letter. Government scientists will quickly come up with the solution to any catastrophic problem and make sure that it is made available to all citizens. Central planning, especially by government experts, and centralized models of control are the proper response to any crisis. Todd’s nightmare is not just a narrative cop-out, a convenient way to cut the tale short; it is also an ideological evasion. If everything is just a dream, the C.D.C. does not have to confront the implications of the fact that its “perfect plan” might actually fail in practice. 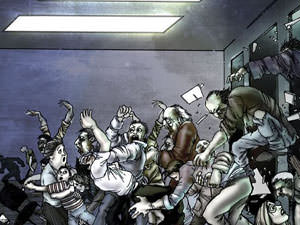 The C.D.C.’s self-portrait in Zombie Pandemic may set a record for shameless self-promotion by a federal bureaucracy, but its claims for the technical mastery of government experts are echoed in many disaster narratives coming out of Hollywood. But not all. In recent years, pop culture has begun to offer counternarratives, which call into question the wisdom of government central planning and suggest that in the face of disaster, even on a massive scale, individual initiative, local knowledge, self-reliance, and dispersion of population and resources offer the best chances of survival. The Walking Dead, in both its original comic book incarnation and its recreation as an AMC cable television series, is perhaps the most interesting attempt to deconstruct the pro-government ideology of many Hollywood disaster narratives.

Next Week: The Walking Dead and a Refuge from the Modern State.

Paul A. Cantor is Clifton Waller Barrett Professor of English at the University of Virginia and the author of Pop Culture and the Dark Side of the American Dream: Con Men, Gangsters, Drug Lords, and Zombies.