A
A
Home | Node | Ron Paul Institute: Shut Up! Cancel Culture and the War on Speech

Ron Paul Institute: Shut Up! Cancel Culture and the War on Speech 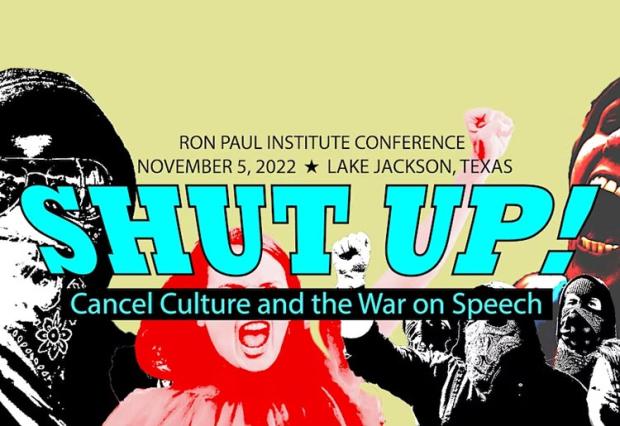 The phrase “I don’t agree with what you say but I will defend to the death your right to say it" may have been inaccurately attributed to the 18th century writer Voltaire, but it accurately reflects the sentiment of our Founding Fathers. That is why they included as the very first Amendment to the US Constitution a prohibition on government restriction of speech.

Free speech—even ugly speech—is the sine qua non of a free society. As authoritarians through history consolidate power, the freedom to criticize government and to engage in vigorous debate is the first to be cancelled.

Something is happening in the US that should terrify us all. From governments to students to celebrities to average Americans, we are becoming a society that substitutes the above saying with, “I don’t agree with what you say...and I'll make sure you are never able to say it again!"

On college campuses what may be controversial speeches are not just ignored or even boycotted by those who disagree with what may be presented. Instead, all stops are pulled—including violence—to "cancel" the event.

Governments are getting in the game as well. While both the political Left and Right in the US today imagine that the tightening noose around free speech is a conspiracy against them alone, what is taking place is far more sinister.

Government-funded US NGOs like the Atlantic Council team up with big social media companies to determine what speech should be allowed and what should be banned or suppressed. Opinions critical of the prevailing foreign policy position in Washington, for example, are sent down the memory hole and their authors are often accused of being agents of foreign governments.

The US government even gets directly involved, pressuring social media companies to ban users it views as threatening to the approved narrative.

The Ron Paul Institute for Peace and Prosperity has observed with alarm the steady destruction of both speech and tolerance of differing opinions. The greatest achievement in the former communist countries of Eastern Europe was not censorship. It was the self-censorship that followed. It's not enough to refrain from controversial speech out of fear of reprisals: the goal is to banish those thoughts before they even develop into speech. That is where we are headed.

With that in mind, the Ron Paul Institute will be holding a conference in Lake Jackson, TX on November 5th to explore free speech and its enemies. What is happening to discourse and how can we protect the right to think and speak as we wish?

We have an exciting line-up of speakers for this very timely event. Your modest $55 admission fee includes a full, hot buffet breakfast along with coffee and tea.