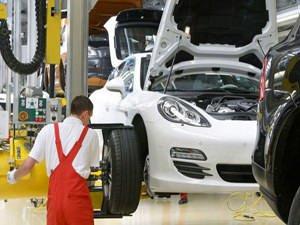 11/20/2013Frank Hollenbeck
The US government and the European Commission (EC) recently slammed Germany for running large current account surpluses. Paul Krugman jumped in with this beauty of a quote:

The problem is that Germany has continued to maintain highly competitive labor costs and run huge surpluses since the bubble burst — and that in a depressed world economy, this makes Germany a significant part of the problem.

Only in today’s surreal world of economic policy could being highly competitive be deemed detrimental. This criticism of Germany is not new, but we are no longer living in the 1950s. Germany does not have its own currency, and there is little that is “German” in a German export.

A BMW produced in Germany but sold in Spain contains parts coming from all over the world. Most, but not all, of the labor will be German, but technological innovations have reduced labor cost to about 10 percent of the price of a car. The return of capital will go to bond holders and shareholders who may be anywhere in the world. BMW may distribute a dividend to a Spanish shareholder who may use those euros to purchase Spanish goods. To say a BMW is a product of Germany alone is a stretch.

We can bring this down to the individual level to make this argument crystal clear and highlight the silliness of the argument. We run a current account surplus with our employer and a current account deficit with our supermarket. Our employer buys more from us than we buy from him and the reverse is true about our relationship with our supermarket. However, we are not running to the supermarket and demanding that the manager buy more of our goods or services.

Furthermore, Germany’s current account surplus with other Europeans or euro zone members has been cut in half between 2007 and 2012, and Germany’s surplus with the rest of the world has more than tripled. This is what we would expect from the opening up of trade, gains from the division of labor, and specialization made possible by focusing on areas of comparative advantage. To criticize this trend is to criticize the stated reasons behind the European Union’s creation in the first place.

For reasons that are hard to understand, the European Commission has a rule that it must intervene if a member country has a current account surplus over 6 percent of output over a three year period. Germany’s was 7 percent last year, and it probably will record a similar number this year. If the free exchange of goods and services and free movement of capital leads to a 10 percent, 20 percent, or greater surplus, where is the problem? Why does this rule even exist? Why would the EC impose a constraint that limits the movement of goods and services or capital? Wasn’t the EU created to foster the elimination of unjustifiable constraints? The EU should not be surprised that countries want to leave when it imposes such illogical rules.

Underlying this criticism of Germany is mercantilism rearing its ugly head again. Within the mercantilist mindset, we must have a winner and a loser and not just winners resulting from mutually beneficial voluntary exchange. Germany is supposedly producing more than it’s consuming. Of course, this is playing on a common fallacy which some exploit for political gain. Every euro that is spent on a German car or other product will be received as income by someone who will spend that income. There is a direct link between production and expenditures. Say’s law tells us that (the right) supply creates its own demand. Consumption never needs encouragement: everything that is produced is consumed, either to produce other goods (investment) or for personal satisfaction (consumption).

Of course, the “solution” to this imagined problem is to have Germany boost government spending to spur growth in other EU countries. Never mind that Germany already has a debt to GDP ratio of 82 percent, well above the 60% that had previously been viewed as excessive. It is a standard Keynesian solution that constantly runs up against the logic of the “crowding out” effect. Every dollar that the government spends must be a dollar that would have been spent by someone else. The government can alter who gets a piece of the economic pie, but it cannot increase the size of the pie.

Even when Germany had its own currency this criticism never held water. Back then, a current account surplus would have meant an equivalent capital outflow, financing Italian or French government spending, or investments in plants and equipment in Spain, Italy, China or elsewhere. Again, words like surplus or deficit are remnants of our mercantilist past and have absolutely nothing to do with being good or bad.

If Germany has competitive labor costs and can build a better widget, where is the problem? Wasn’t the EU created to make Europe more competitive by allowing resources to move (e.g., labor to Germany) where they are most efficiently used? The criticisms by the EC and the IMF are even more out of line when you look at the reasons given for their existence.

The German Finance Minister Wolfgang Schäuble, a member of Chancellor Angela Merkel’s center-right Christian Democratic Union (CDU) was absolutely right when he said, “The German current account surplus offers no reason for concern for Germany, the euro zone or the world economy.” In reality, Germany should be praised not scolded. Its productive prowess is one of the few things moving the world economy forward.