GET NEWS AND ARTICLES IN YOUR INBOXPrint
A
A
Home | Mises Library | Voting Booths vs. the Marketplace

Voting Booths vs. the Marketplace 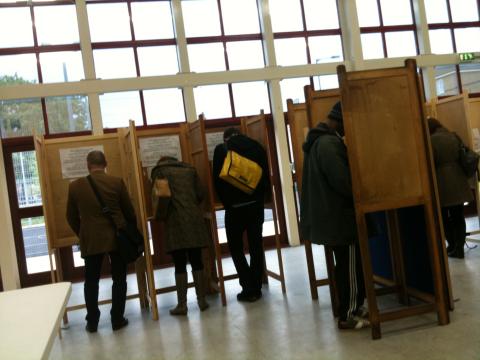 Statists—those who advocate concentration of economic power in centralized government—salivate like Pavlov's dogs at the mention of economic difficulties, real or imagined. Statists of a left-liberal bent are usually louder than their counterparts on the right. Nevertheless, when the economic difficulty "bell" rings, all begin repeating the mantra about "new, imaginative government programs" bringing us closer to the promised land.

So successful has this salivating class been that virtually nothing Americans buy escapes seemingly endless lists of government do's and don'ts. The lists aren't cheap.

Not only do Americans lose their freedom to engage others in the marketplace on mutually agreeable terms, they also have to pay the bureaucratic busybodies that take away this freedom. Like having to buy your own guillotine, huh?  Moreover, Americans also spend additional billions fighting and/or complying with the regulations. Nobel Laureate economist Milton Friedman once estimated that fighting/complying costs exceed the government's explicit budgetary costs by a multiple of twenty!

The popular rationale for the government do's and don'ts is that in their absence, avaricious sellers prey upon uninformed buyers. Predator and victim reverse in the labor market. That is, workers (sellers) must be protected from avaricious employers (buyers). The salivators' vision is one of government as a kindly nanny who gets the "right things" produced in the "right way."

Critics of regulation effectively cede the offensive to statists by confining their critique to case studies of regulation gone awry. Statists remain free to claim that things will be different next time. Professor Sam Peltzman's (University of Chicago) well-known examination of the U.S. Food and Drug Administration is such a study. Raising the regulatory hurdle on new pharmaceuticals was ostensibly designed to reduce the chances of harmful prescription drugs appearing on the market. However, the higher hurdle necessarily meant that the introduction of new, beneficial drugs would be delayed. Peltzman demonstrated that the downside costs of delayed introduction exceeded the upside benefits of fewer harmful drugs.

Retrospective studies like Peltzman's gloss over a serious logical flaw at the heart of regulation's popular rationale. Once the flaw is recognized, the rationale crumbles like a house of cards. The point is simple yet powerful. To wit: in democratic societies, elected political officials are the final arbiters of the government's marketplace do's and don'ts. Who elects these political officials? Surprise! The same people supposedly incapable of making informed decisions in the marketplace.

How do people who are unable to make informed decisions about, say, lawnmower safety become able to make an informed choice among legislative candidates, who then select the "right" amount of lawnmower safety? Could it be that bolts of enlightenment strike Americans in the voting booth but not in the marketplace? Yeah right. More plausible is the proposition that the popular rationale for regulation is statist nonsense. Logic points to Americans being better informed in the marketplace than in the voting booth.

To see why, suppose you're shopping for a refrigerator. You've narrowed the choice to a General Electric or a Frigidaire. If you opt for the General Electric, it's your call as far as size, color, and features. At each stage in the process, your choices are "decisive"—that is, they determine the brand, size, color, and features of the refrigerator that ends up in your house. Your incentive to be informed about refrigerators is obvious.

Now instead of buying a refrigerator, suppose you're "shopping" for your state's new U.S. senator in the next election—that is, you're voting. Suppose further that the Senate is scheduled to enact sweeping new refrigerator regulations. By voting, you're engaged in "indirect" refrigerator shopping. The problem is that you have little or no incentive to discover the candidates' positions on refrigerator regulation. In the overwhelming preponderance of election outcomes, your vote is simply going to mean your preferred candidate either wins by one more vote or loses by one less vote. Your vote isn't "decisive." Notwithstanding the fact that new refrigerator regulations will be sweeping, you have little incentive to bone up on the candidates' positions.

Does this mean that the refrigerators people buy are more important than who is in the U.S. Senate?  Not at all. Rather, it means people have more incentive to learn about refrigerators they're going to buy as compared to senatorial candidates who restrict their refrigerator choices. Ditto for the countless other goods and services bought and sold in the marketplace every day.

The larger lesson is that uninformed voting provides an important reason for democratic societies to limit the scope of government. The limitations, moreover, must go beyond mere statute law. Otherwise, the hazards of uninformed voting will impinge on the attempt to avoid the hazards. The limitations must be constitutional in nature. Americans had such a constitution during the country's early decades, so the idea is not a pipe dream. Unfortunately, that constitution started to slip away in the nineteenth century and the erosion continues.