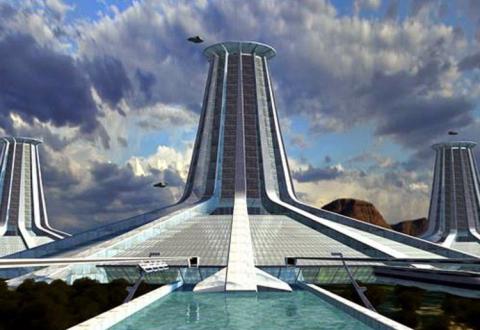 During my trip to Haiti, I got into a discussion with my fellow volunteers about the financial crisis. Things were going quite well as we all agreed that the rich investment bankers deserved no taxpayer bailout. However, my hopes were dashed when one of the more intellectual guys suddenly declared the problem was capitalism, and that a "resource-based economy" would relieve the world of scarcity.

Apparently this idea is catching on; a reader emailed me the grandiose description of "the Venus Project." Although the people involved are admirably doing what they can to rid the world of injustice, they lack basic knowledge of economics. In the present article, I'll run over some of the biggest gaps in their proposal.

The Venus Project is an organization that proposes a feasible plan of action for social change, one that works towards a peaceful and sustainable global civilization. It outlines an alternative to strive toward where human rights are no longer paper proclamations but a way of life.

We operate out of a 21.5-acre Research Center located in Venus, Florida.

For our purposes in this article, the website's section on a "Resource-Based Economy" is much more interesting:

The term and meaning of a Resource-Based Economy was originated by Jacque Fresco. It is a system in which all goods and services are available without the use of money, credits, barter or any other system of debt or servitude. All resources become the common heritage of all of the inhabitants, not just a select few. The premise upon which this system is based is that the Earth is abundant with plentiful resources; our practice of rationing resources through monetary methods is irrelevant and counter productive to our survival.

I am going to be quite critical of the Resource-Based Economy (RBE) in the remainder of this article, so I want to start off on a positive note: I don't believe that these thinkers are wrong in their visions of what life on Earth could be like. Their website is filled with beautiful visions of sea colonies and pollution-free technology, and I agree with them that the world could easily look like this in a few decades.

However, these idealists are wrong to blame our current, dysfunctional world on capitalism or money per se. On the contrary, if everyone respected each other's property rights — meaning there would be no more petty crime, but also no more taxation, military conscription, or drug prohibition — then humanity would become fantastically wealthy, in material terms. (I give just a taste of the potential bounty in this article.)

In fact, in a truly free world, in which billions of people grew up never knowing of theft — let alone of mass murder — the productivity of labor and corresponding standard of living could be so high that, by our present standards, people would seem to be living in a "postscarcity" condition.

Now of course, this technically wouldn't be true, so long as the laws of physics were the same, and so long as the human mind created ever more desires. But consider someone in our real world right now, who goes from living on the streets in Calcutta to being adopted by a middle-class family in suburban America.

When this person goes with his new family into a Costco or a Sam's Club, he enjoys the air conditioning that relieves him from the outside heat. If he has to go to the bathroom, he can do so. He can get a drink of water at the fountain and then he can go throughout the store, eating samples of delectable food. At the end, his adoptive parents might leave the store without having purchased anything. The former beggar from Calcutta would be astounded at all the "free" goods and services he just enjoyed, and he might understandably conclude that America is a land of abundance, whereas India is a land of want. 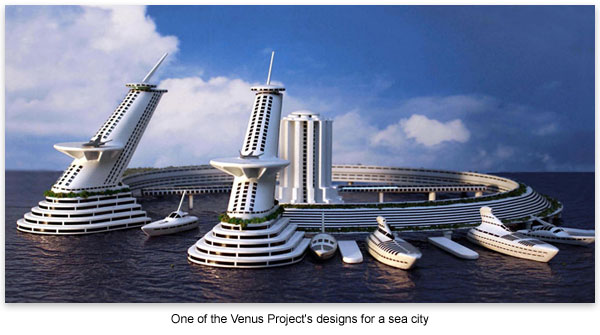 What I am arguing, then, is that in a truly free world, where we all respected each other's property, the rise in living standards would be analogous to our hypothetical boy who moves from the streets of Calcutta to the suburbs of Maine. In that fantastic world, giving someone a "free" heart surgery might be as cheap as giving someone a piece of gum in our current society.

If such a world really is technologically possible, we should cut the socialist dreamers some slack. Their fault lies not with their vision, but with their plans for achieving it.

Did World War II Disprove the Existence of Scarcity?

The website gives an odd historical illustration of its principles:

A resource-based economy would utilize existing resources from the land and sea, physical equipment, industrial plants, etc. to enhance the lives of the total population. In an economy based on resources rather than money, we could easily produce all of the necessities of life and provide a high standard of living for all.

Consider the following examples: At the beginning of World War II the US had a mere 600 or so first-class fighting aircraft. We rapidly overcame this short supply by turning out more than 90,000 planes a year. The question at the start of World War II was: Do we have enough funds to produce the required implements of war? The answer was no, we did not have enough money, nor did we have enough gold; but we did have more than enough resources. It was the available resources that enabled the US to achieve the high production and efficiency required to win the war. Unfortunately this is only considered in times of war.

Let's think about what the writers mean by saying the United States at the start of World War II "did not have enough money" to pay for the war effort. Presumably, they mean that the American public would never have consented to the explicit taxation (and government borrowing) that would have been necessary for Uncle Sam to persuade resource owners to voluntarily hand over their items to the government.

So what did the federal government do to overcome this "lack of money"? Why, it simply forced American citizens to scale back their own consumption, in order to free up scarce resources and redirect them into war production. Specifically, the Federal Reserve created money out of thin air to lend to the government: 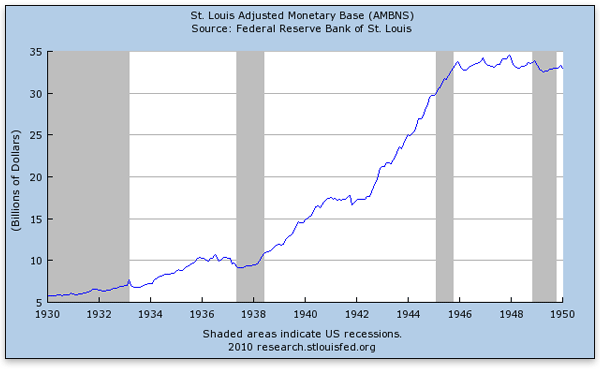 At the same time, the government physically threatened anyone who dared to raise prices above the permissible limits. The result was that the fraction of total output going to the private sector drastically fell during the war years: 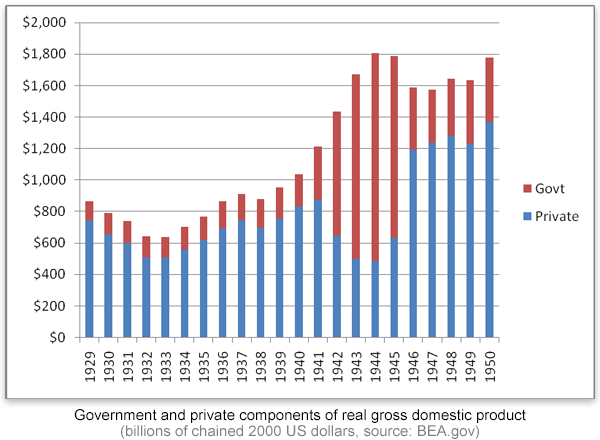 Before leaving this section, I should point out that the above chart misleadingly gives the impression that total output went up during the war years. Yet as Bob Higgs points out, this is a statistical artifact of massive government expenditures coupled with price controls. Simply put, the Fed and banking system flooded the economy with new money, raising the "numerator," while the government made it illegal for merchants to raise prices, thus holding down the "denominator." Therefore, "real GDP" figures show a huge burst during the war years, but these numbers are meaningless.

Contrary to the claims of the RBE website, World War II did not illustrate the productive powers of mankind. On the contrary, it showed how incredibly wasteful and monstrous human affairs can become when property rights are systematically violated.

Ignoring the Lessons of the Calculation Debate

Our writers offer little explanation of where this newfound abundance will come from, but they do say this:

As we outgrow the need for professions based on the monetary system, for instance lawyers, bankers, insurance agents, marketing and advertising personnel, salespersons, and stockbrokers, a considerable amount of waste will be eliminated.

This view demonstrates either that the writers have never heard of the socialist-calculation debate or that they failed to learn its lessons.

Ludwig von Mises showed that money prices are not arbitrary; it really means something when a firm suffers a loss. Specifically, when a firm loses money it means that customers are not willing to pay as much for the finished product (or service) as the firm had to spend acquiring inputs. Loosely speaking, then, a firm that loses money is one that takes valuable resources and turns them into something that society values less.

Mises put his finger on the fundamental problem with socialism. If the state owns all the resources, then there can be no market prices for the tractors, kilowatt-hours, barrels of oil, and other things necessary for production. Looking at the various productive enterprises in operation at any moment, the central planners won't have a common denominator for all of the different combinations of inputs going into each one. The planners won't know if a particular car factory "makes sense," because they will just have an enormous stream of data describing the various resources going into the factory, and the amount of finished cars coming out of the factory. These brute facts alone don't tell the planners if they are efficiently using the resources being consumed in the factory.

Returning to the quotation above, our RBE writers don't realize that their world would still require the services of bankers, insurance agents, and advertising personnel. Whether conducted at the individual level, or by "society" through a group of representatives, people would still need to decide how much of their resources to save, and how much to invest in various enterprises. They would also need to decide how to deal with the possibility that key workers could drop dead of a heart attack, upsetting their production plans. Furthermore, even in the RBE utopia, there would still be constant product innovation. Citizens would need to be informed of the new options, so that production decisions could change to reflect the public's desires. Thus we see that even the RBE would require some form of bankers, advertisers, etc.

Competition as a Discovery Procedure

Our writers overlook one of the key insights of Friedrich Hayek when they claim,

Considerable amounts of energy would also be saved by eliminating the duplication of competitive products such as tools, eating utensils, pots, pans and vacuum cleaners. Choice is good. But instead of hundreds of different manufacturing plants and all the paperwork and personnel required to turn out similar products, only a few of the highest quality would be needed to serve the entire population. Our only shortage is the lack of creative thought and intelligence in ourselves and our elected leaders to solve these problems.

Yet as Hayek pointed out decades ago, it is not a given fact what the "highest quality" products are, nor how to create them in the most economical way.Download PDF. Our society currently enjoys very high-quality tools, eating utensils, pots, etc., precisely because entrepreneurs are in constant rivalry with each other, striving to "steal" customers away from each other, through offering better products at lower prices.

Our present world is manifestly unjust. In addition to wars and genocides, there are also pockets of shocking poverty that could be quickly eradicated if only the right social institutions were in place.

Those championing the Resource-Based Economy recoil in horror from our present world, and understandably so. Yet because they have obviously not studied Austrian economics, they have misdiagnosed the problem.

Abolishing money will not solve the world's problems, because money is an indispensable tool to aid in economic calculation. Rather, the way to raise the material standard of living around the world is to foster a universal respect for property rights.