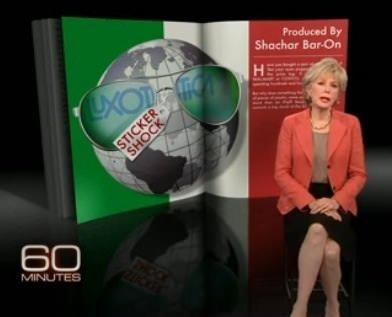 A recent 60 Minutes piece by Lesley Stahl cut into an extremely urgent problem of our day: expensive sunglasses. The report identified a possible monopoly in the market for glasses, a firm called Luxottica, which owns almost all the leading brands of eyewear, four large retailers of glasses, and even a popular vision insurance provider.

Stahl interviewed the CEO of Luxottica, Andrea Guerra, and questioned his business practices, the prices of his products, and Luxottica’s growth over the years. At times, she almost seemed to scold the successful CEO for, well, being so successful.

In her interview, Stahl complained about the prices of Guerra’s products, saying, “they're very expensive. They can be very expensive.” Guerra, with a heavy Italian accent, responded with “They can. This is one of the very few objects that are 100-percent functional, 100-percent aesthetical, and they need to fit your face for 15 hours a day. Not easy, and there is a lot of work behind them.”

Other hard-hitting remarks like “How does the consumer benefit from all of this?” and “Your prices are still high,” were met with nonchalant (yet true) answers like, “Everything is worth what people are ready to pay.”

Do Guerra’s profits indicate that he is a consumer-harming monopolist? What light does Austrian economics shed on this question?

We Are All Monopolists

The standard neoclassical treatment of monopolies is a neat and tidy graph that shows the differences in price, quantity, and consumer and producer surplus as well as a nifty triangle depicting “dead weight loss,” or loss in total social welfare. These differences and consequences are compared to the “perfectly competitive” X-marks-the-spot standard. 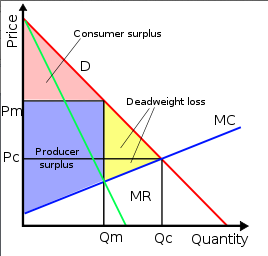 The Austrian (or “causal realist”) treatment, as you might expect, provides deeper insights into the concepts and implications of monopolies than mere points on a graph, and has a rich understanding of prices and their meaning. You might also expect that, for causal realists, the analysis starts with individual preferences and proceeds deductively from there.

Let us begin with Lesley Stahl herself, as a producer of news, reports, exposés, and the like, her labor is primarily as a journalist. Stahl sells her labor to CBS—the two have an agreement on work load (either by time or by output) and have settled on a price, or a salary in this case. When she accepted her salary offer, she weighed it against alternatives, specifically the next highest valued alternative in her preference ranking. As Rothbard points out:

“In judging how much of [her] labor to sell and at what price, the producer [Lesley Stahl] will take into consideration the monetary income to be gained, the psychic return from the type of work and the ‘working conditions,’ and the leisure forgone, balancing them in accordance with the operation of [her] various marginal utilities. Certainly, if [she] can earn a higher income by working less, [she] will do so, since [she] also gains leisure thereby.”1

Is Stahl therefore a greedy monopolist, restricting output and increasing the price of her labor to maximize monetary and psychic gain? In short, no. The only reason she can do this is because CBS’s demand for her labor as a journalist is partially inelastic, i.e., a higher price/salary results in fewer labor hours demanded, but still greater total expenditure on Stahl’s labor. The important takeaway from this is that both sides of the labor/salary negotiation are based on voluntary, individual preferences for labor, leisure, and monetary income.

At this step, we realize that we are all monopolists because we all charge a positive price for our own labor as its sole “producer.” Either that or none of us are monopolists and prices in the unhampered market are fairly determined by consensual, peaceful negotiation based on individuals’ preferences.

Then what about Luxottica’s alleged decision to restrict output? Let us trace through the implications of their production decisions through an example adapted from Rothbard:

Suppose that, before Luxottica’s tyrannical reign over the market for sunglasses and other eyewear, it took 1,000 laborers, six factories, and five tons each of plastic, metal, and glass to produce five million sunglasses in a year. An entrepreneur, under the name of a new firm, “Luxottica,” steps onto the scene, buys out the existing firms, and sees an opportunity for profit by producing three million sunglasses in a year and only employing 700 laborers and two factories. The entrepreneur also uses fewer raw materials to make the three million sunglasses. What can we say thus far? Now 300 laborers, four factories, and tons of raw materials are relinquished to other productive efforts by other entrepreneurs! Supposing Luxottica and the other entrepreneurs successfully gauged consumer demand for their products, this second allocation of factors of production provides more value to the consumers as a whole. How then could we say that the production decision by the new entrepreneur is “unjust”?2

Restricting output, therefore, only frees up factors of production to be used elsewhere. We cannot claim with certainty that restricting output of one product results in less production of goods overall. And, even in the case of entrepreneurial error, either by the new “monopolist” or by the users of the newly relinquished factors of production, other entrepreneurs will see the mishap; new iterations of production structures will be employed to make better, more efficient, and more successful tries at meeting consumers’ demands. This is the type of “unseen” counterfactual we have been warned not to ignore by Frédéric Bastiat and Henry Hazlitt.

In her investigation, Stahl also interviewed Brett Arends, a columnist for Smart Money and MarketWatch.com. Arends noted that, “the whole point of a luxury brand is to persuade people to pay $200 for a product that cost $30 to make.” Although the intent was to make the listener cringe, this is a noteworthy achievement, setting aside the vague but fiery “persuade” semantics. If an entrepreneur can take a lump of raw materials of relatively low value and employ labor and capital to transform it into something of high value to consumers, is this not a service to mankind?

But how do we account for the dramatic difference in prices of the final product and the factors of production? Put another way, why is it so cheap to make expensive sunglasses?

We know from the founders of Austrian economics, Carl Menger and Eugen von Böhm-Bawerk, that the value of tools, machines, factories, raw materials, and labor are derived from the value of the final goods they help produce. In other words, the value of factors of production are “imputed” retrospectively, with the value of the final good in mind. Luxottica is one player among other producers of eyewear in the market for factors that can be used to make sunglasses. Further, the plastic, metal, glass, factories, machines, and laborers are similarly suited to produce other goods like scissors, watches, pens, earphones, calculators, and countless other goods. In other words, these factors are relatively “non-specific.” Those factors were employed by Luxottica at a cost of about $30 per piece of eyewear (according to Brett Arends) because Luxottica was able to bid those factors away from other lines of production at their respective prices.

But we can go even further, like a child repeatedly inquiring, “Why?” Luxottica outbid the other players in the market because the entrepreneur expected profits from employing those factors at that price. If another entrepreneur aspired to produce the same luxury sunglasses at the same price, the two firms would compete for the same factors, driving the price of the factors up to their discounted marginal value product (DMVP), i.e., the factors’ specific contributions to increasing revenue to the producer, discounted by the pure rate of interest. (This is, of course, putting aside intellectual property considerations.)

Therefore, we can put an upper and lower bound on factor prices. They will not exceed their DMVP, or else the entrepreneur wouldn’t find it profitable to employ that factor. They will also be no less than the value to the next highest bidder of the factor, which is simply informed by that entrepreneur’s DMVP from using the same factor. Here we see that all prices of all goods and the factors used to produce them are derived from consumer preferences.

We say they are dynamic because individuals’ value scales (including time preferences) are constantly changing, just like the ideas about how to physically transform raw materials and goods into other goods. One day, Jones prefers Ray-Bans to Oakleys; the next he may prefer Oakleys to Ray-Bans.

The changes involve remarkable complexity, too. As soon as Jones decides he likes glasses with thick frames, Andrea Guerra is formulating more efficient ways to meet Jones’s desires. Jones’s preferences ripple through the structure of production, introducing changes at possibly every stage.

Profits, therefore, are a critical measuring stick that tell entrepreneurs they are meeting consumers’ wishes. Losses provide similarly critical information to entrepreneurs that they aren’t meeting consumers’ wishes and are wasting resources that should be used elsewhere. Profits may also be considered as compensation to the entrepreneur for taking on such incredible risks. Luxottica’s considerable profits, insofar as they are not attributed to state intervention, simply represent Guerra’s knack for predicting future consumer demands for his products successfully, a risky task subject to dynamic, complex, and subjective valuations. Guerra should be commended, not condemned, for making profits, as they are a sign of his company’s contribution to consumer satisfaction.

Of course, the state is the elephant in the room. Where is the state in this story? According to many of the comments from 60 Minutes’s internet subscribers, the state is just twiddling its thumbs in the background, ignorantly not enforcing U.S. antitrust law on Italian companies. A quick internet search of U.S. regulations on non-prescription sunglasses led me to an almost 5,000 word document from the FDA replete with manufacturing requirements for impact resistance, flammability, biocompatibility, and optical properties, as well as labeling information, branding guidelines, adulteration laws, and a slew of other legal requirements. Before concluding that this would only diminish Luxottica’s dominion in the U.S. eyewear market, consider this: older, larger companies tend to be able to meet such legal requirements with more ease than newer, smaller companies trying to stake their own claim in the market. This is usually because the older, larger companies make friends with, bribe, or send their own people to the state to write the regulations to standards they already meet or could easily meet. We can’t say for sure that Luxottica has done this, but would it surprise you?

Only the state can enforce monopolies that truly make society worse off. Only the state can put in place “unfair” or “unjust” prices that are not derived from individuals peacefully interacting in markets, but by the whims of state officials hungry for more loot. Only the state can print its own money, driving prices of all goods up and creating a chaotic environment for entrepreneurs trying to decipher consumer wants and allocate land, labor, and capital accordingly. Indeed, the state may have been a more intriguing subject for an exposé than Luxottica’s production of luxury eyewear.

Luxottica is the sole producer of many brands of sunglasses, including some of the most popular today, just like Lesley Stahl is the sole producer of her own labor or how I am the sole producer of this article. Defining monopolies this way is fruitless. Even demonizing “monopoly prices” falls on its face, because as Andrea Guerra pointed out, “Everything is worth what people are ready to pay.” The CEO could have just as easily said, “My prices are based on voluntary individual preferences for goods from my entrepreneurial efforts to combine lesser valued factors toward producing higher valued goods.” Well, the homegrown Italian may have struggled with a few of those words.