GET NEWS AND ARTICLES IN YOUR INBOXPrint
A
A
Home | Mises Library | Mankiw vs. Rothbard on Tax Reform

Mankiw vs. Rothbard on Tax Reform 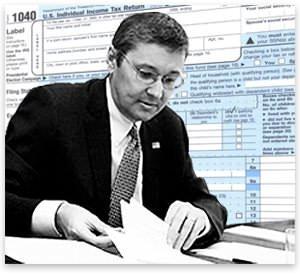 In the present article, I'll critique Mankiw's views from a Rothbardian perspective. The ostensible consensus viewpoint among economists on fixing the tax code shows the perils of groupthink.

Right off the bat, Mankiw is on shaky footing when he declares, "Economists who study public finance have long agreed with William E. Simon, the former Treasury secretary, who said that 'the nation should have a tax system that looks like someone designed it on purpose.'"

This statement, though innocent enough, is actually quite misleading. Mankiw writes as if the situation in economics is akin to saying, "Doctors who study lung cancer agree that people shouldn't smoke." Mankiw's statement makes it sound as if only a noneconomist — or at least, only a complete crank — could think that the legislators like the current tax code. Instead, we are supposed to wring our hands over how these loopholes and crazy minutiae just appear out of nowhere. Mankiw's quotation of Simon conjures up an image of the legislators — guided by the expert economists of course — periodically taking out the clippers to hedge the bushes growing up around the IRS.

Everything about this view is wrong. In contrast to money or the English language, the tax system was designed on purpose. It's true, it wasn't designed by a single individual, but the US federal government's tax code is far from a "spontaneous order" in the Hayekian sense.

The reason the public-finance economists are so baffled by the tax code is that they ignore the insights of the public-choice economists. It's true, if we take the politicians at their word, then the current tax code is inexplicable. Why, for quite some time the feds (a) gave tax breaks to encourage refiners to use ethanol but (b) imposed a tariff on Brazilian-made sugarcane ethanol. Which is it? Do the politicians want to save the planet or not?

The answer is obvious: the politicians liked both rules, because the point was to curry favor with domestic corn growers. Brazilian farmers can't vote in US elections (at least not yet), so there would be no point in giving refiners a lower tax bill to the extent that they used imported ethanol.

Before moving on to his principles of tax reform, we should also mention that even on its own terms, Mankiw's quote from Simon would fail to impress Murray Rothbard. Rather than pining for a tax code that appeared to be consistently designed with some (unnamed) purpose in mind, Rothbard would much prefer a tax code that violated no one's rights. (It would be a parsimonious code indeed.)

Conceding the Amount the Government Wants to Spend

Mankiw's first principle takes the government's spending as given:

BROADEN THE BASE AND LOWER RATES The United States tax code is filled with deductions and exclusions that shrink the basis of taxation. The smaller base in turn requires higher tax rates to raise the revenue needed to fund government. The starting point of reform is to reverse this process.

This is always the danger when economists act as mere technocrats, advising the government on the best way to wring output from the taxpayers living on the government's estate. (I can say this with authority, because I've written a similar handbook myself!

Yet a Rothbardian can reason in the opposite direction. If we assume for the sake of argument that we're going to have any taxes, how should we rank them? The Rothbardian gives high marks to a tax category that makes it difficult for the government to raise revenue, since a well-funded government is itself inimical to freedom, economic growth, and just about any other goal that civilized people adopt.

In fact, one of the reasons Rothbard himself praised the "head tax" — where every citizen pays a flat dollar amount to the government, period — is that it would necessarily be quite low (otherwise some citizens couldn't afford it). Needless to say, one doesn't hear such views in the typical discussion of tax reform.

Mankiw proceeds to recommend something that is quite standard in the mainstream literature:

TAX CONSUMPTION RATHER THAN INCOME Almost four centuries ago, the philosopher Thomas Hobbes suggested that taxes should be based on consumption, not income. Income measures a person's contribution of labor and capital to society's production of goods and services. Consumption measures the quantity of those goods and services he gets to enjoy. Hobbes reasoned that because consumption better reflects the benefits a person receives as a member of society, it is the proper basis of taxation.

Much modern economic theory confirms that conclusion. In standard models, a consumption tax allows the economy to achieve the best allocation of resources over time, whereas an income tax needlessly discourages saving, investment and economic growth.

Rothbard was one of the few economists to systematically tackle the typical view that — at least theoretically — it was efficient to tax consumption but not income. Now it's true that an income tax (if applicable not only to wages and salary but also to interest, dividends, and capital gains) will distort the tradeoff between present and future consumption, and in that respect the mainstream economists are right that it introduces yet another source of inefficiency, beyond the extraction of the tax payment itself.

However, Rothbard lamented that often the supply-siders treated saving and investment as good things in and of themselves, when really the goal should be to let individuals decide what to do with their own property. (For example, if the government threatened to imprison anybody who saved less than 50 percent of his income each year, that would certainly "boost investment and economic growth," but it would hurt genuine welfare, properly defined.)

Rothbard (though not using these terms) also pointed out that in the typical tax literature, mainstream economists often engaged in partial-equilibrium analysis, rather than general equilibrium. In other words, Rothbard said that to evaluate the impact of a tax, we really ought to let the whole system settle down in the new situation, and see what happened. Such reasoning might reverse our initial view:

Hence, the seemingly common-sense view that a retail sales tax will readily be shifted forward to the consumer is totally incorrect. In contrast, the initial impact of the tax will be on the net incomes of retail firms. Their severe losses will lead to a rapid downward shift in demand curves, backward to land and labor, i.e., to wage rates and ground rents. Hence, instead of the retail sales tax being quickly and painlessly shifted forward, it will, in a longer run, be painfully shifted backward to the incomes of labor and landowners. Once again, an alleged tax on consumption, has been transmuted by the processes of the market into a tax on incomes.

For those who are interested in a numerical exposition, I have written a long post walking through two other recent defenses of the "tax-consumption-not-income" idea. Among other problems, I point out that we can flip the logic on its head: just as the typical free-market economist says that an income tax is "really" a tax on saving, and hence illegitimate, so too can I say that a consumption tax is "really" a tax on labor, and hence illegitimate.

The reason for this outcome is that when advocating a tax on "consumption," economists never include leisure as one of the consumption goods. Hence, the existence of a consumption tax inefficiently distorts the leisure/labor tradeoff, and leads people to work less than they otherwise would have. It is exactly analogous to the problem of an income tax causing people to save too little.

KEEP IT SIMPLE, STUPID This engineering aphorism is based on the timeless insight that complex systems are more likely to break down, often in ways the designer failed to anticipate. It applies with force to tax systems.

Indeed, unlike engineering systems, complex tax systems go awry because an army of highly paid accountants and tax lawyers is ready to take advantage of any loophole it can find. Remember when President Obama's stimulus plan offered tax credits for electric cars? Suddenly, the sale of golf carts took off.

To be sure, any tax system will be subject to gaming, which is why we will always need the Internal Revenue Service. But the more we use narrowly targeted taxes and tax breaks, the more gaming there will be.

Filling out tax returns will never be a delight. But if reform included simplification, the task might become a bit less onerous. And if a few accountants and tax lawyers were induced to become engineers and doctors instead, society will have moved a big step in the right direction.

Putting aside Mankiw's odd reference to the "need" for the IRS — how did the nation survive before 1913? — this is boilerplate free-market stuff. And yet, Rothbard the iconoclast would beg to differ:

There is … a good reason for our paying money to tax lawyers and accountants. Spending money on them is no more a social waste that our purchase of locks, safes, or fences. If there were no crime, expenditure on such safety measures would be a waste, but there is crime. Similarly, we pay money to the lawyers and accountants because, like fences or locks, they are our defense, our shield and buckler, against the tax man.

Everybody knows that the current tax system in the United States — or any other country for that matter — is a giant source of economic inefficiency. However, a Rothbardian perspective shows that even many of today's free-market economists concede too much to the government when discussing tax reform.