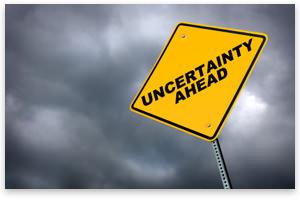 A recent Circle Bastiat blog post highlighted a discussion by Robert Higgs where he argued,

anemic investment recovery evinces, at least in part, the prevailing regime uncertainty brought about by the Fed's and the Bush and Obama administrations' massive, ill-advised, and counter-productive interventions in the economy during the past five years. 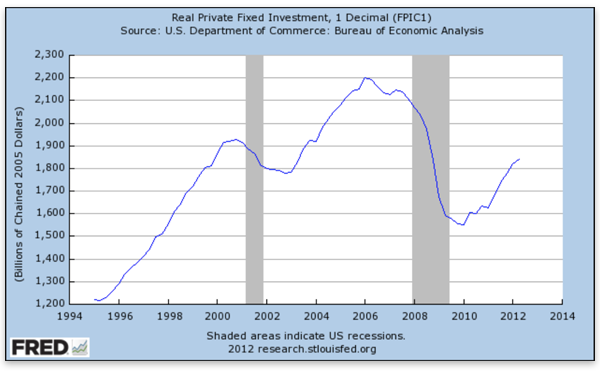 He supported his argument with data from the St. Louis Fed's FRED shown in figure 1:

Don Boudreaux, at Café Hayek, nicely summarizes the factors at the heart of business reluctance to undertake risk, invest and create jobs in the present political climate:

Because entrepreneurs and investors aren't keen to produce and take risks when the president threatens them with higher tax rates, saddles them with crushing regulations, and scolds them for allegedly being selfish, ungrateful, predatory, and (to boot!) not especially important to economic growth anyway, entrepreneurs and investors respond by producing less and taking fewer risks.

When Higgs's data is supplemented by private non-farm employment data, as is done in figure 2, the relevance for the US economy of both the Austrian business-cycle theory (ABCT) and regime uncertainty to the current economy is even more apparent.

Given, as shown by Higgs in September 2011, that consumptions spending has recovered, the problem is a lack of recovery in investment spending. Investment spending and employment have not recovered because of two related problems.

First, the structural unemployment due to the misdirection of employment and malinvestments caused by inappropriately expansionary monetary policy from mid 1990s to 2007 which generated back-to-back boom-bust cycles1 lingers because the corrective forces of market adjustments have been hindered by Keynesian fiscal policy and a Fed commitment to preventing any and all downward price adjustments. Dan Boudreaux, in a recent Café Hayek blog post, "The Price of Monetary Meddling," nicely summarizes the key aspects of employment and malinvestments in a response to the Economist:

You are critical of F.A. Hayek's thesis that "malinvestments" — investments poorly coordinated with the saving plans of households and hence the strength of future demands for consumer goods — can generate periods of high unemployment ("Hayek on the standing committee," Sept. 15). You then write that the "better lesson to take from Hayek" comes from "[h]is later works praising the price mechanism and fretting about economic planning."

But what you call Hayek's "better lesson" is the larger insight at the heart of his theory of malinvestment. Hayek understood that successful mutual coordination of the economic decisions of millions of people occurs to the extent that prices — which guide people's economic decisions — accurately reflect underlying economic realities such as resource scarcities and households' preferences for saving. He reasoned, therefore, that government activities that distort prices cause prices to 'lie' about underlying economic reality and, hence, cause prices to mislead economic actors into making an unusually large number of plans that are destined to fail.

In the case of malinvestment (note: not simple over-investment), excess money creation distorts the interest rate, causing it for a time to mislead businesses into producing too many long-lived capital goods and too few other goods. For the economy to again thrive requires that these malinvestments be corrected.

Secondly, despite the recently inappropriately celebrated drop in the measured unemployment below 8 percent,2 regime uncertainty and the associated slow pace of investment spending is the best explanation of the extremely slow recovery of employment. Businessmen and the financial press have recently begun to echo Higgs.3 Steve Wynn, CEO of Wynn Resorts on a scrapped business plan states,

I'm afraid of the president. I have no idea what goofy idea, what crazy, anti-business program this administration will come up. I have no idea. And I have to tell you Jon that every business guy I know in the country is frightened of Barack Obama and the way he thinks.

Confidence among U.S. small businesses cooled in September as fewer companies said they planned to hire or invest in new equipment, a survey found.

The fourth decline in the past five months for the measure showed business leaders may be putting off some of their hiring and investment decisions because of a lack of clarity on tax and regulatory policy.

Small-business "owners are in maintenance mode; spending only where necessary and not hiring," William Dunkelberg, the group's chief economist, said in a statement. "Owners are unwilling to put their own capital on the line until the future path of the economy and economic policy becomes clear.

However, while reliance on national income and product account data can illustrate the problem, it can greatly understate the magnitude of the problem while supporting potentially harmful policy options. As pointed out by Roger Garrison (2001, 226),

In the judgment of the Austrians, Keynes [and NIPA data] disaggregated enough to reveal potential problems in the macro economy but not enough to allow for the identification of the nature and source of the problems and the prescription of suitable remedies.

Cochran and Glahe (1999, 109–117) compare the Austrian expenditure-flow structure-of-production model to the Keynesian circular flow and conclude,

These models [circular flow] focus on aggregates. Hayek's model [Austrian capital-structure based modeling] cannot be expressed in or understood in terms of such aggregates. All the key features of Hayek's [microeconomic] analysis are absent in models that use the national income concept as a starting point for macroeconomic analysis.4

In a forthcoming chapter, Cochran summarizes:

The Austrian perspective as represented by a structure of production indicates that future oriented spending is a much larger portion of current economic activity than represented by national income and product accounts (Cochran and Glahe (1999, 107–117). Investment as measured by product and income accounts, greatly understates the role of capital or future orientated expenditures in the economy. Hayek (2008 [1931], 156) raised the point in his criticism of Foster and Catchings. Expenditures on "raw materials, semi-finished products and other means of production" greatly exceed "the value of consumption goods that are simultaneously offered in the markets for consumption goods [emphasis mine]. Hayek ([1935] 2008, 156 note 43), in support of his argument, cites work by M.W. Holtrop, based on data developed by I. Fisher and the NBER, that shows for 1912 the sum of money payments was "more than twelve times larger than the sum of all money incomes." Skousen (2007 [1990] pp. xi–xxxix) provides an excellent summary. Shenoy (2007) provides historical examples of these complex investment chains.

Mark Skousen, in "Consumer Spending Does Not Drive the Economy," summarizes:

The truth is that consumer spending does not account for 70 percent of economic activity and is not the mainstay of the U.S. economy. Investment is! Business spending on capital goods, new technology, entrepreneurship, and productivity are more significant than consumer spending in sustaining the economy and a higher standard of living. In the business cycle, production and investment lead the economy into and out of a recession; retail demand is the most stable component of economic activity.

Professor Skousen has attempted to partially bridge the gap with an alternative measure of economic activity, gross domestic expenditures (GDE). He argues,

GDE appears to be more than twice the size of GDP, and has historically been three times more volatile than GDP, and serves as a better indicator of business cycle activity. I conclude that consumer spending represents approximately 30 percent of total economic activity (GDE), not 70 percent as often reported. This conclusion is more consistent with the leading economic indicators published by the Conference Board.

Why is this important? The more aggregated model of the economy can lead one to misdiagnose the cause of the boom-bust and the slow recovery as aggregate demand shocks requiring continuing doses of monetary or fiscal stimulus. Examples are the Fed commitment to QE infinity, the call from market monetarists for monetary expansion to return nominal GDP growth to its long-term-trend path, or those who erroneously claim the slow recovery is a normal response to a recession accompanied by a financial crisis.5 A wrong diagnosis of the problem leads to bad policy. Both current monetary policy and proposed renewal of Keynesian fiscal policies run the risk of generating further misdirections of production, which, to the extent they might positively impact employment now, run the risk of generating even higher unemployment in the future.6

George Selgin, in "Intermediate Spending Booms," sums it up nicely:

But in seeking to free monetary theory and policy from the Keynesian overemphasis on interest rates, the Market Monetarists tend to downplay the extent to which central banks can cause or aggravate unsustainable asset price movements by means of policies that drive interest rates away from their "natural" values. Such distortions can be significant even when they don't involve exceptionally rapid growth in nominal income, because measures of nominal income, including nominal GDP, do not measure financial activity or activity at early stages of production. When interest rates are below their natural levels, spending is re-directed toward those earlier stages of production, causing total nominal spending (Fisher's P x T) to expand more than measured nominal income (P x y). Assets prices, which are (appropriately) excluded from both the GDP deflator and the CPI, will also rise disproportionately. It is the possibility that such asset price distortions may significantly misdirect the allocation of financial and production resources that lies at the heart of the "Austrian" theory of boom and bust.

Continuing this policy environment will again leave with us a "tiger by the tail." The out would be to follow an Austrian policy. It is not too late.7

Hayek, F.A. 2008. Prices & Production and Other Works: F.A. Hayek on Money, the Business Cycle, and the Gold Standard edited with an introduction by Joseph T. Salerno, Ludwig von Mises Institute.