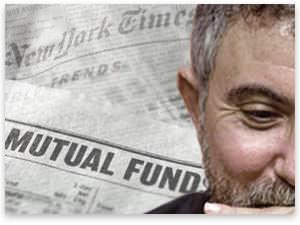 Let Me Google That for You, Paul

How do the Austrians propose dealing with money market funds? I mean, it has always been a peculiarity of that school of thought that it praises markets and opposes government intervention — but that at the same time it demands that the government step in to prevent the free market from providing a certain kind of financial service. As I understand it, the intellectual trick here is to convince oneself that fractional reserve banking, in which banks don't keep 100 percent of deposits in a vault, is somehow an artificial creation of the government. This is historically wrong, but maybe the actual history of banking is deep enough in the past for that wrongness to get missed.

But consider a more recent innovation: money market funds. Such funds are just a particular type of mutual fund — and surely the Austrians don't want to ban financial intermediation (or do they?). Yet shares in a MMF are very clearly a form of money — you can even write checks on them — created out of thin air by financial institutions, with very few pieces of green paper behind them.

So are such funds illegitimate?

In the Austrian view MMMF are not technically money and so deposit holders do not hold full reserves, but rather invest those deposits in short-term commercial paper. MMMF can lose value and owners may get back less than they deposited without the deposit holder going bankrupt. Technically they are not instantly redeemable and are not a final means of payment.

According to Joseph Salerno,

Although MMMF share accounts at first glance look like MMDAs [money-market deposit accounts], they are clearly excludable from the TMS [true money supply], because they are neither instantly redeemable, par value claims to cash, nor final means of payment in exchange. This requires a brief explanation of the nature of MMMFs.

Each MMMF share represents a claim to a pro rata share of a managed investment portfolio containing short-term financial assets, such as high-grade commercial paper, certificates of deposit, and U.S. Treasury notes. Although the value of a share is nominally fixed, usually, at one dollar, the total number of shares owned by an investor (abstracting from reinvested dividends) fluctuates according to market conditions affecting the overall value of the fund's portfolio. Under extreme circumstances, such as a stratospheric rise in short-term interest rates or the bankruptcy of a corporation whose paper the fund has heavily invested in, the fund's investors may well suffer a capital loss in the form of an actual reduction of the number of fixed-value shares they own. Unlike a check drawn on a demand deposit or MMDA, therefore, an MMMF draft does not simply represent a direct transfer of current claims to currency, but a dual order to the fund's manager to sell a specified portion of the shareowner's asset holdings and then to transfer the monetary proceeds to a third party named on the check. Note that the payment process is not finally completed until the payee receives money, typically in the form of a credit to his demand deposit. (Austrian Economics Newsletter 6, no. 4)

No Paul, we do not want to ban MMMF.

This quote from Joseph Salerno is from the first item to appear on a Google search for "Austrian economics money market mutual fund."

First, They Ignore You …

Paul Krugman writes a typically silly column on the Austrian School's approach to defining the money supply. As usual, his purpose is not to inform, or analyze, or explore, but to ridicule anyone who disagrees with The Paul. A few reactions:

A Question to Krugman — from an Austrian "Renegade" Professor

Paul Krugman's jejune column1 querying Austrians on their view of MMMFs — as if they have never thought or written about the subject — has been roundly skewered by Austrians. But I have a question for Krugman: Why, Paul, would you be interested in the least about what Austrians think about anything?

To understand the significance of this question and the momentous implications of Krugman's answer, we need to go back to Krugman's typology of economists. This question is significant because, according to Krugman's view in his book Peddling Prosperity (1994), "there are two different kinds of economists … professors and policy entrepreneurs," and they are "radically distinct species."

The "professors" are academic economists. Like "ostriches and penguins" the professors are "slightly ridiculous." They write papers that are densely packed with indecipherable mathematics and jargon, and "most of these papers are not worth reading." In fact they are written not to be widely read but merely to impress the author's colleagues with his cleverness. The ideas advanced in these papers are not original or definitive explanations of how the economy actually works, but rather "ingenious elaboration without fundamental innovation" — "old wine in new bottles, usually with fancier mathematical labels."

All of this Krugman freely concedes.

Ah, but if one would only back up far enough and view the proceedings from a distance, he would see that the professors are engaged in an "enterprise that steadily adds to our knowledge." The truth is that economics is a "primitive science," akin to medical science at the end of the 19th century, when physicians knew basically how the body worked and not much more. True these primitive medical scientists were able to advise how to prevent some diseases and what quack procedures and medicines to avoid, but they could not cure very many diseases. So it is with economics professors today who know a lot about how the economy works. They can even definitively advise how to prevent hyperinflation and in most cases how to avoid depressions. But there is much that remains a mystery to these primitive practitioners of the dismal science. In particular, "they don't know how to make a poor country rich or bring back the magic of economic growth when it seems to have gone away."

Oh yeah, and one more thing about members of the professoriate: they mainly write for other professors and rarely make appearances on TV. When they do address the lay public they seldom make definitive pronouncements on policy issues. They are nothing if not humble in the face of their acute awareness of the limitations of knowledge imposed by the primitive state of their science. (By the way this hardly sounds like Krugman the New York Times "Conscience of a Liberal" columnist so beloved of the Democratic left — but that is a story for another day.)

"Policy entrepreneurs," according to Krugman, are a different breed altogether. They write books mainly for the public and appear on TV. They strive to influence public opinion and economic policy. While many are journalists, financial pundits, and lawyers, some have PhDs in economics and jobs as economics professors, just not at the right kinds of academic institutions. For example, they may habitate at "unorthodox environments like Harvard's Kennedy School." But the feature that essentially distinguishes a policy entrepreneur from a professor is the language that he speaks and the audience that he mainly addresses. When addressing the public, the former speaks plainly and offers "unambiguous diagnoses" where the latter is "uncertain." The mind of the policy entrepreneur is unclouded by "existing economic theories," while that of the professor is teeming with inhibitions imposed by these theories against expressing anything with certitude. Krugman points to supply-siders Arthur Laffer and Robert Mundell on the right and Lester Thurow, Robert Reich, and John Kenneth Galbraith on the left as epitomizing the academic qua "policy entrepreneur." He at one point refers to supply-side academics as "renegade professors."

Now, in Krugman's aforementioned column, it is clear that he regards Austrian economists as nothing more than the benighted "policy entrepreneurs" orchestrating Ron Paul's campaign for sound money and a free-market banking system. So to reiterate my question to Krugman in a slightly different form, Why would an eminent, Nobel laureate, Ivy League "professor" like yourself care one whit about the views of putative "renegade professors" like the Austrians who reject modern macroeconomics root and branch and aggressively seek to disseminate this view to the public as well as to the rest of the economics profession?

However Krugman chooses to answer this question — and I hope that he does — it is clear that the "existing economic theories" that he so vehemently defended in the 1990s have failed abysmally in preventing or explaining the financial crisis. As a result Krugman and the rest of the establishment macroeconomic "professors" have been catapulted back in time to embrace the crude and discredited ultra-Keynesian policy of inflating our way back to prosperity. Indeed we renegade Austrian professors have the only correct diagnosis and cure for the present economic stagnation — and I am certain of that.