03/22/2010Robert P. Murphy
At his popular New York Times blog, Paul Krugman is at it again, offering a very misleading analysis of deficit spending. Without technically lying, Krugman perpetuates the myth that Herbert Hoover insisted on budget austerity in the midst of the Great Depression. Then Krugman interprets a chart with adjectives that show his eyes can only see what his Keynesian theory will allow.

More than a year ago I coined a phrase that seems to have made its way into the econolexicon; writing about how cutbacks at the state and local level would tend to undermine fiscal stimulus at the federal level, I said that we had fifty Herbert Hoovers.

But I was wrong. Via Mark Thoma, we have at least fifty-one — because we have to add David Broder to the list.

Before I get there, let's note that fears about fiscal drag at the state and local level have, in fact, proved justified. Aizenman and Pasricha have a fairly definitive analysis; you can get the quick and dirty version just by looking at government purchases of goods and services…

Krugman then produces a chart (which we'll get to in a moment) showing that federal spending has risen while state and local government spending has fallen. He concludes,

And David Broder thinks this is a good thing, that Washington should be more like the states.

What amazes me is that Broder doesn't even seem to be aware that there's an argument on the other side, let alone that most economists are dismayed by the effects of fiscal austerity. If Broder is a guide to Beltway conventional wisdom — which he usually is — we've got a big problem.

This notion of Herbert Hoover engaging in merciless budget cutting has become quite entrenched in the prodeficit community. The idea is that the reason the Great Depression was so awful was that Herbert Hoover was afraid to engage in sufficiently stimulative fiscal policy, at the same time that the gold standard prevented the Federal Reserve from implementing sufficiently expansionary monetary policy.

According to this view, FDR came sweeping into office and increased the deficit, which pulled the US economy back from the brink. But then — alas — Roosevelt too succumbed to the irrational deficitphobia, and his attempt to balance the budget plunged the nation back into deep recession in 1937.

I have already documented the theoretical and empirical problems with this narrative, when Christina Romer gave a version of it to defend the Obama administration's plans for "stimulus" spending.

Let's go back to Krugman's original "Fifty Herbert Hoovers" column to see exactly what his point is:

No modern American president would repeat the fiscal mistake of 1932, in which the federal government tried to balance its budget in the face of a severe recession. The Obama administration will put deficit concerns on hold while it fights the economic crisis…

It's true that the economy is currently shrinking. But that's the result of a slump in private spending. It makes no sense to add to the problem by cutting public spending, too…

The priority right now is to fight off the attack of the 50 Herbert Hoovers, and make sure that the fiscal problems of the states don't make the economic crisis even worse.

After reading Krugman's piece, the casual reader would be quite confident that the Hoover administration slashed spending in 1932. Such a reader would probably be surprised to learn that the "fiscal mistake of 1932" was a reduction in spending of about $63 million, or 1.3 percent of the prior year's budget. Krugman's column mentions nothing of the tremendous hike in tax rates at this time, such as the top income tax rate which jumped from 25 percent to 63 percent (!) in 1932. (See my book on the Depression for more details.)

Yet these are just the minor surprises. The real surprise would come if the reader saw a compilation of federal budget deficits as a share of the economy, and saw that the Hoover administration (a) came nowhere near a balanced budget after its attempt at "fiscal austerity" and (b) saw the deficit grow as a share of GDP after the stock market crash in every single year Hoover remained in office. See for yourself, keeping in mind that government budgets are calculated with respect to fiscal, not calendar, years:

Isn't that extraordinary? The Keynesians typically measure budget deficits as a share of the economy. Yet despite the merciless budget-austerity measures implemented in calendar year 1932 (which show up in fiscal year 1933), the budget deficit as a share of GDP was actually at a record high for the Hoover term.

To be clear, the budget deficit in absolute terms shrank just a tad, from $2.7 billion dollars in fiscal year 1932 to $2.6 billion in FY 1933. But the size of the economy itself imploded — due in part to Hoover's obscene tax-rate hikes, but also to the general deflation. (From June 1932 to June 1933, the consumer price index fell a whopping 6.6 percent.) So in real terms, federal spending went up every year of the Hoover administration, even after the alleged budget bloodbath of 1932.

Of course, Krugman could come back and argue that although the budget deficit went up, it was too little, too late. After all, Hoover was apparently in the grip of the liquidationists, and so maybe his budget deficits were tiny in the grand scheme of things.

To get a sense of just how big Hoover's deficits were, we can compare the table above to the first term of George W. Bush. (Note that the federal government's fiscal years now start on October 1, compared to July 1 back in the 1930s.)

Isn't that interesting? After Herbert Hoover engaged in his merciless austerity programs, which recklessly placed the goal of a balanced budget above the need for countercyclical stimulus spending, the deficit was 4.5 percent of GDP. And yet during the first term of the George W. Bush administration — when Krugman and others denounced him for reckless tax cuts while starting a war — the budget deficit peaked at 3.6% of GDP.

Yes, yes, the clever Keynesian can always wriggle free from the handcuffs and escape the trap we've set for him. You see, the economy needed massive budget deficits in the early 1930s, whereas there was no such "output gap" in 2004.

Krugman's habit of looking at the data and seeing whatever "facts" his Keynesian theory requires is beautifully illustrated in his commentary on a chart contrasting federal with state and local government spending:

[L]et's note that fears about fiscal drag at the state and local level have, in fact, proved justified. Aizenman and Pasricha have a fairly definitive analysis; you can get the quick and dirty version just by looking at government purchases of goods and services: 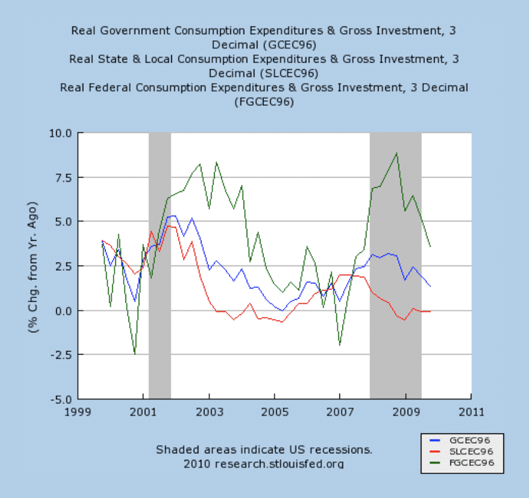 The…green line shows the rate of growth of federal G, which did shoot up, although it's starting to fade out. The red line shows state and local G, which moved in the opposite direction. And the blue line in the middle shows the total, which did nothing much.

Now, this omits tax cuts and transfer payments, which presumably did something. But I think it's fair to say that state and local cuts largely offset federal stimulus.

Now here's what's really interesting: Try to match up Krugman's commentary with the actual lines in that chart. You will find it rather difficult.

First of all, Krugman is trying to show that the boost in federal spending was largely offset by the drop in state and local spending; that's why he says the blue line "did nothing much."

Well what does Krugman consider to be "nothing much"? As we can see from the chart, the blue line — spending at all levels of government — did in fact go up as a result of the immense increase in federal government spending. The recession officially began in December 2007. From the 4th quarter of 2007 through the 4th quarter of 2009, spending at all levels (the series Krugman is measuring above as the blue line) increased by 4.4 percent.

You can check that my figures make sense, by simply eyeballing Krugman's own chart. The shocking "fifty Herbert Hoovers" at the state and local levels only very briefly managed to make their year-over-year growth rates negative. In other words, the red line in Krugman's chart just dips below the zero line very modestly in late 2008 and early 2009.

In fact, pretend for a moment that you didn't know when the huge fiscal crisis in state and local spending hit the United States, and all you had to work with was Krugman's chart. Looking at the red line, wouldn't you have thought the plunge from 2001 to 2003 was far more dramatic? And wouldn't you have thought the negative growth rates from late 2004 through early 2005 were an indication of more severe fiscal austerity than the relatively modest dip of recent vintage?

Paul Krugman loves to buttress his commentary with statistics and charts. But very often his own data don't agree with the story he's selling. This doesn't mean Krugman is consciously lying; he might honestly "see" his interpretation jumping out of the numbers. But rival explanations — for example ones that claim government deficit spending doesn't help an economy — fit the evidence far better.