GET NEWS AND ARTICLES IN YOUR INBOXPrint
A
A
Home | Mises Library | Gun Control: Lessons from European Violence 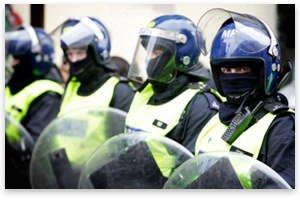 The recent outbreaks of indiscriminate violence in Europe highlight a disturbing trend of decivilization throughout Western society. Pundits and "experts" weave countless theories to try to explain what's happening. Some sound plausible enough, but only those of us who understand sound economic theory have the tools to decipher the meaning of these current events. Those who use these tools will discover that the state has not only caused this turmoil directly in various ways (via welfarism, militarism, inflation, state schooling, and more), but it is also preventing people from defending themselves and their property. I am referring, of course, to gun-control laws.

First we'll consider the riots that erupted across England last week. Vandals and looters were wantonly destroying property, committing arson, stealing goods from stores, and mugging passersby. Innocent people were rightfully scared for their well-being, especially since the police are evidently too inept to stop any of this. One reporter, after being mugged and beaten, called the authorities only to be told to "go home."

It should hardly be surprising people are so defenseless. As of 2007, England, Wales, and Scotland ranked below nearly every other developed country in terms of private firearm possession.

British gun-control laws can only be described as draconian. The 1997 Firearms Act all but banned handguns from private ownership. (Interestingly, this legislation was not applied to Northern Ireland, where gun ownership is far more widespread.) All "legal" firearms require a state-issued license to possess. License holders must report their firearms purchases to the police and renew their licenses every few years. Local police precincts can impose additional restrictions on gun ownership within their turf. Police have the power to revoke the license if they suspect the license holder has violated their rules.

"Those of us familiar with Misesian theory know that the state will always tend to respond to the disastrous consequences of intervention with even more intervention."

All of these hurdles and red tape significantly raise the cost of purchasing and possessing a firearm. On the margins, we should expect this to lead to less firearm ownership and fewer means for innocent people to defend themselves and their families.

In the wake of the recent violence, British property owners have had to resort to alternative means of self-defense. Amazon.co.uk reported that baton and aluminum baseball bat sales soared over 5,000 percent overnight on the third day of the riots. One customer wrote the following review:

This bat is perfectly weighted and will suit any UK shop-owner looking to protect their property. Thanks to the ergonomic handle, one easy swing should be enough to shatter patellas, skulls or any other bone on your targeted looter. Personally, I would recommend also investing in some fingerless gloves for extra grip.

Another point to be made about the debacle in England involves the murder that triggered all this. A 29-year-old man named Mark Duggan was shot and killed by agents of the state on August 4th, 2011, in Tottenham, where the riots began soon afterward. Police quickly accused the victim of firing at them, but the Independent Police Complaints Commission reported on August 10th that there exists no evidence that the victim's gun found at the scene had been fired at all.

Maybe police would be less inclined to murder citizens in cold blood if they were facing an armed populace.

Perhaps not surprisingly, Norway is also a bastion of gun-control fanaticism, although gun ownership is far more prevalent among Norwegians than among Brits. (Gun ownership in both countries is far lower than in the United States.) Norwegian laws ban all automatic weapons. Handguns are only allowed if they are a certain caliber, and there are restrictions on the types and quantities of ammunition one can buy. Concealed carry is illegal. As is sadly the norm in our world, all would-be gun owners must first apply for licenses, which are normally granted only to hunters and professional shooters. If you are lucky enough to be granted a license, police are allowed to inspect your home to check if your firearms are properly stored.

"If even a single camp counselor had a firearm, perhaps the tragedy would have ended differently."

As we all know, these laws did nothing to stop Anders Behring Breivik from massacring 69 people on the tiny island of Utøya. In fact, if even a single camp counselor had a firearm, perhaps the tragedy would have ended differently. It is mind-boggling to me that the organizers of a youth camp taking place in the wilderness had no means of defending the children. That is the height of irresponsibility. Is it any surprise the camp was organized by the country's left-wing Labor Party?

Once again, the agents of the state proved their own incompetence. Police didn't arrive on Utøya until an hour after the maniac started his slaughter. This is what happens when the police are given a de facto monopoly on gun ownership.

Those of us familiar with Misesian theory know that the state will always tend to respond to the disastrous consequences of intervention with even more intervention. As if trying to prove Mises right, Finnish politicians quickly announced following the Norway attacks that they will accelerate the imposition of stricter gun-control policies in Finland. These new rules will make handguns less accessible, raise age requirements, and force gun license applicants to undergo "testing for their suitability." The politicians are no doubt promising these laws will make people safer. Adherents of Rockwell's law, on the other hand, will know exactly what to expect.

The state of Western society is clearly worsening. As individuals and governments drown in debt, economic growth will remain stagnant at best. The dependent classes of society will see their standard of living rapidly deteriorate as the crisis unfolds. If history is any indicator, crime waves and social unrest won't be far behind. We're already seeing the start of this in places like England and Norway, where gun restrictions encourage violence, destruction, and looting. The primary lesson to take away from this is the importance of having a means of protecting yourself and your loved ones in these times of panic and uncertainty.

Brian Foglia holds a BA with distinction in economics from Richard Stockton College.