Grappling with the Banality of Evil 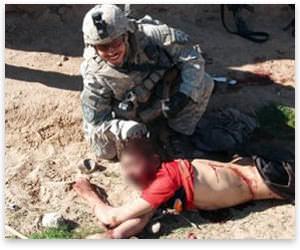 A headline from the UK Guardian reads "US soldier admits killing unarmed Afghans for sport."

"The plan was to kill people, sir." That is what Jeremy Morlock respectfully told an army judge about his participation in a "kill team" of soldiers in Afghanistan who targeted harmless civilians and then staged the corpses to look like dead insurgents. Members of the kill team took trophy photos of the murdered civilians; some kept body parts as mementos.

What do I mean when I refer to an act as evil?

When I use the word, it is within the Randian framework of an action that is profoundly antilife and inflicted without just cause. By the word evil, I refer exclusively to human behavior that is intentional — not accidental and not coerced.

I agree with psychiatrists that bad behavior caused by mental conditions, such as schizophrenia, does not qualify; I disagree with those who discount free will and ascribe all malevolent behavior to such mental or emotional disorders. Just as some people make the intentional and uncoerced choice to be dishonest, others choose to destroy innocent life for profit or pleasure. Mankind has a vast range of preferences, and some people will always embrace those at the extremes.

And yet it is difficult to reconcile the photographs of a clean-shaven, all-American Morlock with the Morlock who sat so calmly in a courtroom and respectfully described the vicious murder of innocent people for sport.

For that matter, how can you explain the other soldiers in the kill team, or those who actively covered up for them?

Grappling with the issue of evil is nothing new to me. In that struggle, two authors in particular have been valuable: Hannah Arendt and Henry David Thoreau.

In her book Eichmann in Jerusalem: A Report on the Banality of Evil (1963) the German-American political theorist Hannah Arendt opened a unique window through which to gaze upon evil. Jewish by birth, Arendt escaped Nazi Europe in 1941 and later became a naturalized American citizen. In 1961, on behalf of the New Yorker magazine, Arendt reported on the Jerusalem trial of Adolph Eichmann, a high-level bureaucrat who had been instrumental in administering the Nazi death camps.

She opened the trial's transcript in order to examine a sadistic monster, but she closed it without finding one. Like his fellow Nazi Heinrich Himmler, who went from being a chicken farmer to heading the notoriously brutal SS, Eichmann seemed to be an ordinary man with a talent for carrying out orders. Arendt coined a term — the "banality of evil" — partly as a way to describe Eichmann's demeanor during the trial, in which he denied all responsibility for the mass murders on the grounds that he was just following orders; he was obeying the law.

In page after page, Eichmann evinced no guilt, malice, or insanity. Indeed, as a man on trial, the most remarkable emotion he displayed was a tendency to brag; Arendt called bragging "the vice that was Eichmann's undoing" because it led him to speak of atrocities that he had not been ordered to commit. To Arendt, it seemed Eichmann would rather die as a war criminal than live as a nobody.

Arendt continued to elaborate on how seemingly ordinary people can commit terrible acts simply because those acts were performed in a systematic manner and within a sanctioned context — a context that disencouraged accountability by rewarding obedience. Thus, unthinkable acts became acceptable because they constituted "just the way things are." A reviewer of Arendt's book observed that the Nazis had "normalized the unthinkable."

Arendt's insights also applied to the more mundane acts of "evil" committed during Hitler's reign. For example, the sudden seizure of Jewish property ceased to be theft if it was done through "proper" paperwork, stamped and filled out in triplicate by a government clerk. Those who processed the forms or inventoried the goods were simply doing paperwork and inventory; they were "honest" people doing their jobs.

The same was true (then and now) of prison guards, special police forces, and an obedient judiciary. They obeyed laws or orders without questioning. For them, the law assumed the role that conscience played in other people. It told them what is right or wrong, and they obeyed.

People decide to obey for many reasons, of course. Some see it as a path to success or importance. Others fear the consequences of disobedience. Many, like those who do the paperwork to facilitate theft or murder, view their jobs as routine and boring — as far from evil as imaginable. They simply want to collect a paycheck or acquire a pension; and they give no thought to the content or consequences of their actions. Indeed, they would probably be offended by anyone who suggested they should.

Despite the parallels, however, Morlock does not fit neatly into Arendt's paradigm. For one thing, he cannot fall back on "obeying orders" as an exculpatory argument. A superior officer in his unit had suggested the kill team, it is true, but Morlock did not receive official orders.

An estimated four comrades-in-arms joined him in the manhunt, and at least several others engaged in shielding them. This may well have provided a context of sanction, but the kill team's repeated cover-ups reveal that they knew their actions were wrong by some standard.

The motives and dynamics of doing evil are almost certainly as complex as those of doing good. I doubt that any one author comes close to capturing it all.

But Henry David Thoreau offers further insight. In his work On Civil Disobedience, Thoreau objected to majority rule because the views of the majority do not always coincide with what is morally correct. Every human being has a fundamental obligation to discover for himself what is just and then to act according to his conscience, even if it contradicts the majority or the law. It is precisely his moral conscience that makes a man fully human.

It is within the military that Thoreau saw the greatest relinquishment of moral conscience; the military proclaims that "obeying orders" is the highest ideal. Thoreau contemplated soldiers who march off to die and to kill strangers in a conflict they know is unjust. He asked whether those soldiers retained or relinquished their humanity when they replaced their own moral judgment with the dictates of legislators. Thoreau concluded that once a man abandons his moral judgment, he becomes a machine; his body becomes a mere tool to be used.

Now, what are they? Men at all? or small movable forts and magazines, at the service of some unscrupulous man in power?…

The mass of men serve the State thus, not as men mainly, but as machines, with their bodies.… In most cases there is no free exercise whatever of the judgment or of the moral sense; but they put themselves on a level with wood and earth and stones; and wooden men can perhaps be manufactured that will serve the purpose as well.

"It is precisely his moral conscience that makes a man fully human."

Many consider service to "their country" to be an automatic virtue, but it is a dehumanizing vice whenever it involves the abandonment of conscience. The military demands this abandonment. And few activities can be as dehumanizing as patrolling foreign streets in the role of an occupying force.

Soldiers like Jeremy Morlock point guns at strangers who have done them no harm; they do so with an induced mindset in which every young child could be an enemy waiting to cause death. When you systematically strip away a man's conscience and then give him a gun with little accountability, the worst within his humanity is likely to surface. Or perhaps Thoreau is correct: his humanity itself may disappear.

Arendt once stated, "The sad truth is that most evil is done by people who never make up their minds to be good or evil." If so, then the first step toward evil for most people is agreeing to blind themselves to that distinction.