Species are fixed. No evolution. "Only man can give rise to man."

Species are fixed. No evolution.

In the great chain of beings, living creatures "evolve" in easy steps, without chasms or gaps between species; in the process of ascending from animals to men each stage differs very little from the next one; properties of different species are partly variable and species can miscegenate and produce monsters or new species on occasion.

Organisms exhibit functionality of all their parts which is helpful in their preservation and propagation — this functionality is the result of a natural process; there is, therefore, an analogy between the origin of natural organisms and these social phenomena that are not the result of human design.

The onset of human beings changed the nature of evolution, which need no longer be characterized by violent struggle.

The importance of the Darwinian theory and process of phylogenetic sifting of the gene pool via natural selection is downgraded; evolution is seen as ontogenetic development of organisms from their genetic make-up; socioeconomic evolution is Lamarckian and differs from the biological one by consisting in transmission of acquired characteristics.

Differences between humans (e.g., in intelligence) have biological basis and are partly hereditary; survival of the fittest is a meaningless tautology since in biology the fittest are these who have survived (so it reads: survival of these who have survived); luck plays a significant part in survival; for these reasons biology cannot be used as a standard for ethics.

The role of environmental challenges in the evolution of the human mind is stressed. 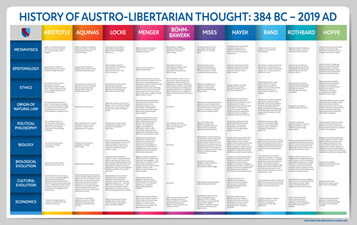 Austrian economics and libertarianism did not spring de novo from contemporary thinkers. They are the culmination of a long historical process, and the “History of Austro-Libertarian Thought” chart aims to trace that process. To do this, ten important thinkers have been selected: Aristotle, Aquinas, John Locke, Carl Menger, Eugen von Bőhm-Bawerk, Ludwign von Mises, F.A. Hayek, Ayn Rand, Murray N. Rothbard, and Hans-Hermann Hoppe. The views of each thinker on metaphysics, epistemology, ethics, the origin of natural law, political philosophy, biology, biological evolution, cultural evolution, and economics are briefly summarized.

The chart has also been constructed to enable the investigation of a hypothesis about human intellectual and cultural evolution. This hypothesis is that human rationality depends on the ability to engage in economic exchange and has developed in tandem with it. It is illuminating to consider the thinkers in the chart in relation to this hypothesis.

Special thanks to John Laing for making this special project possible.