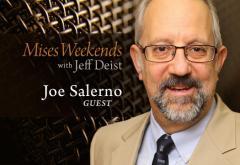 Our guest this weekend is Dr. Joe Salerno, academic vice president at the Mises Institute, and professor of economics at Auburn University. Jeff and Joe discuss monetary policy and gold on the heels of yet another GOP presidential primary debate.

It appears that not even Rand Paul is going to be able to generate much interest in the Fed or in monetary policy, generally, in the 2016 cycle. Ted Cruz has at least alluded faintly to the idea of a gold standard, for which he was promptly savaged by the media — both left and right — for even bringing it up.

As Joe and Jeff discuss, a gold standard is hardly something that needs to be imposed on anyone. It is something that can develop in the market place on its own, and it can develop alongside competing currencies. In other words, gold could be used as money in America alongside the US dollar.

They also talk about how the Fed's interest rate targeting — and really the entirety of its open market operations only serve to obscure what is really going on with the most important metric, which is the money supply. And, finally, Jeff and Joe consider how to sell to the general public (like Ron Paul did so successfully) some sort of anti-Fed populism.